Nuggets build early lead, ride it to blow out Spurs 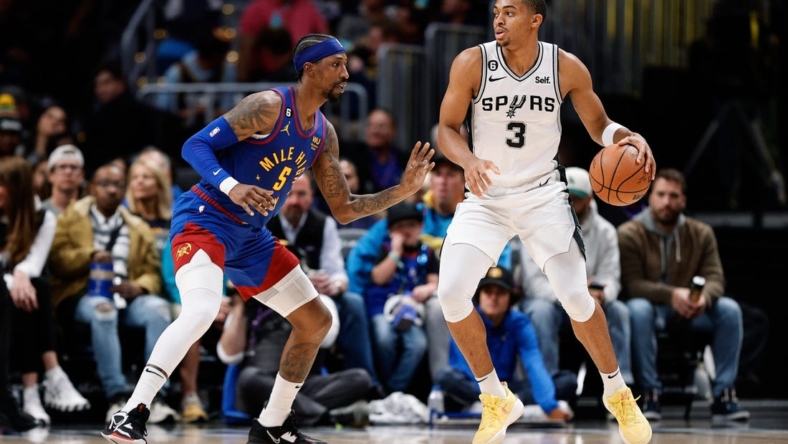 Bones Hyland scored 24 points, Nikola Jokic trailed close behind with 21 on 9-of-10 shooting and added 10 assists and the host Denver Nuggets beat the San Antonio Spurs 126-101 on Saturday night.

Keldon Johnson had a game-high 25 points, Devin Vassell scored 20 and Jakob Poeltl finished with 14 for San Antonio, which has lost three straight.

The game was tied midway through the first period when Denver started to build a lead it would never relinquish.

Gorgui Dieng’s 3-pointer got the Spurs within 23-21, but Jokic hit two free throws and a floater around a layup from Caldwell-Pope, Jeff Green made a layup and Brown converted a three-point play in a nine-point run that put the Nuggets ahead by 11.

Josh Richardson’s short jumper stopped the run but a pair of 3-pointers and a step-back jumper from Hyland capped the 17-6 spurt to close out the first quarter.

Denver continued to build on its lead, going ahead by 21 early in the second quarter and 58-35 halfway through the period. Vassell drained a pair of 3-pointers in a 10-0 San Antonio run that cut the deficit to 13.

The Nuggets responded to take a 70-51 lead into halftime.

Two Denver turnovers early in the third allowed the Spurs to get within 15, but that was as close as they would get the rest of the way.

Jokic hit two short jumpers and then fed Porter for a 3-pointer and a layup that increased the Nuggets’ lead to 86-59. Jokic made another short jumper in the lane before Hyland drained two 3-pointers and fed Jordan for an easy lay-in to give Denver a 99-76 lead heading into the fourth.