Nuggets, back on track in time for playoffs, battle Timberwolves 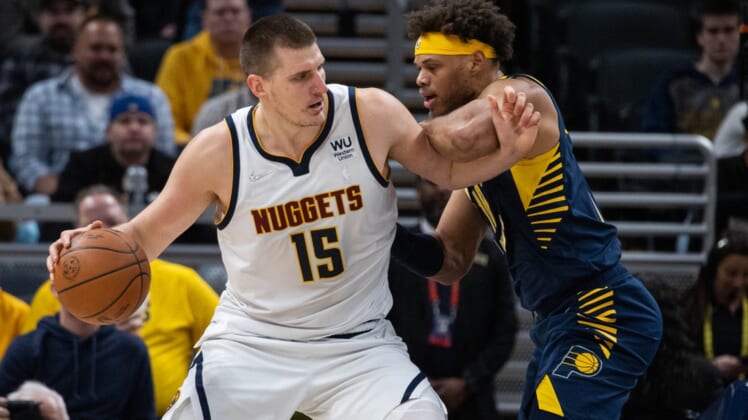 Ten days ago, the Denver Nuggets were teetering on the edge of the play-in tournament in the Western Conference. Three straight wins have changed the landscape for Denver, and now the Nuggets have a chance to win the Northwest Division and possibly get a top-four spot in the conference.

The Nuggets (46-31) sit atop the division with five games remaining — and four of those are home games, starting with Friday’s matchup with the Minnesota Timberwolves. Minnesota (43-34) is in the midst of a revival and has a chance to make the playoffs for the first time since 2018.

While Denver has won three in a row, the Timberwolves have stumbled, losing four of their last five games to fall behind in the race for one of the top six seeds and a guaranteed postseason spot. Minnesota has a favorable schedule after Friday’s game, with its last road game at Houston and then three home games to end the season.

“These games ain’t going to get any easier,” Karl-Anthony Towns said after a 125-102 loss at Toronto on Wednesday night. “It’s going to get much, much harder.”

The Timberwolves had a 17-point lead over the Raptors in the second quarter but trailed at halftime. Towns attempted just 13 shots and scored just 16 points, well below his season average of 24.4 points.

He said he isn’t concerned with his stats, only winning.

The Nuggets blew a 31-point lead at Indiana on Wednesday night but recovered in time to get the win. Nikola Jokic had 12 of his 37 points in the fourth quarter to rescue Denver.

After Friday, the Nuggets play at the Los Angeles Lakers on Sunday afternoon and finish up with home games against San Antonio, Memphis and the Lakers. They have a chance to win 50 games despite not having their two best players besides Jokic this season.

It is still undecided if Jamal Murray (ACL) or Michael Porter Jr. (back surgery) will return this season, but Denver isn’t ruling them out yet. Murray is two weeks shy of a year from a left ACL tear and Porter is four months removed from surgery.

“I don’t think we need to paint ourselves into a corner and make any definitive decisions right now because this is not a mile race where it’s four laps and it’s over,” coach Michael Malone said. “We have no idea where the finish line is. Until we have a better idea of that, let’s leave all options on the table and see what happens on a day-to-day basis.”

Porter, whose back issues limited his one year of college basketball and dropped him in the 2018 draft, had a minor setback in his rehab from the third surgery on his back but could still return.

The Nuggets are hopeful JaMychal Green can return to action. He has missed the last two games with a wrist injury.