The 34-year-old Serbian star is a five-time champion at the ATP Masters 1000 event in Indian Wells, Calif., which runs from Oct. 7-17.

Djokovic has not played since his Sept. 12 loss to Daniil Medvedev in the U.S. Open final, which ended his bid to become the first man since Rod Laver in 1969 to complete a calendar-year Grand Slam.

“I am sorry I won’t get to see my fans in Indian Wells and play in the desert, my favourite place to go. I hope to see you next year!” he posted Wednesday on Twitter.

Djokovic, who last won at Indian Wells in 2016, owns a 50-9 career record in the event. He did not provide a specific reason for his withdrawal.

“We are disappointed that Novak will not be able to join us at the BNP Paribas Open this fall,” tournament director Tommy Haas said. “We hope to see him back in Tennis Paradise next March to contend for a record-setting sixth title in the desert.” 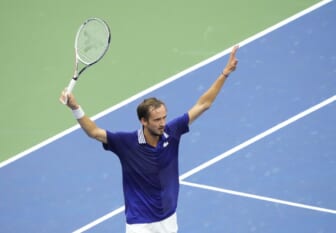 Rafael Nadal and Roger Federer are also skipping Indian Wells next month as both are recovering from injuries.