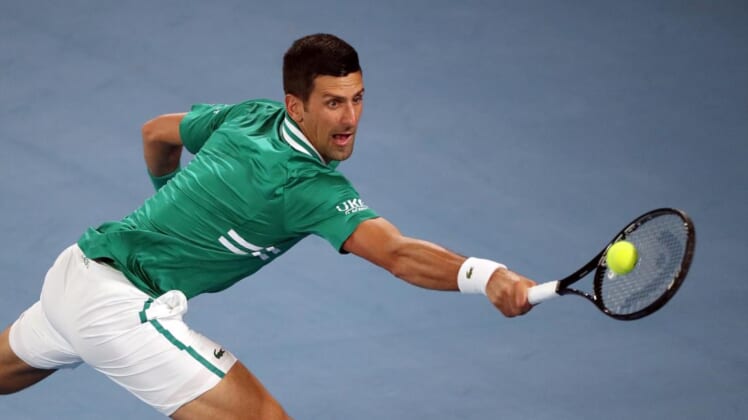 Serbia’s Novak Djokovic is being heavily backed as a slight favorite against Russia’s Daniil Medvedev ahead of the men’s final at the Australian Open on Sunday.

Both players were being offered at -108 by DraftKings early Friday, but Djokovic’s odds shortened to -113 later in the day while Medvedev’s lengthened a touch to -104. That was after the sportsbook reported 72 percent of the bets and 71 percent of the total handle were backing Djokovic.

Medvedev, seeded fourth in Australia, will enter the final riding a 20-match winning streak that includes 12 wins against top-10 opponents. One of those victories came in straight sets against Djokovic in the Nitto ATP Finals in November. Djokovic, the Australian Open’s top seed, has a 4-3 edge in previous meetings, but Medvedev has won three of the past four.

Still, Medvedev will be chasing his first Grand Slam final while eight of Djokovic’s 17 major triumphs have come in Melbourne. He has never lost a final at the Australian Open.

FanDuel is offering Djokovic (-116) as a heavier favorite against Medvedev (+100).

“I just hope that I am going to go out there, show my best tennis,” Medvedev said of Sunday’s match. “As we see, I can win (against) some big names if I play good.”

In his only other Grand Slam final, Medvedev went five sets but lost to Rafael Nadal at the 2019 US Open.

“Medvedev is playing an extremely high (level),” Djokovic said this week. “He’s on a winning match streak, over 20 matches won. He’s just the man to beat, you know.”