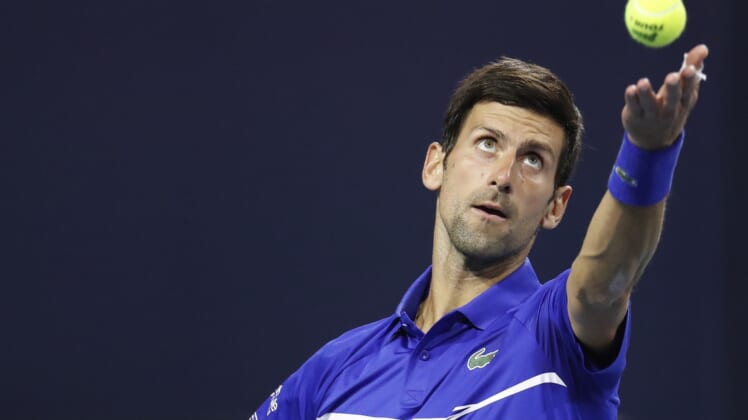 Novak Djokovic is set to be held in quarantine in Australia over the weekend while a court awaits documentation it deems pertinent in ruling on the Serbian’s visa status.

Djokovic was detained attempting to enter Australia by the Border Force when his medical exemption for entry into the country, where he planned to participate in the Australian Open starting Jan. 17, was called into question.

The world No. 1 player was moved Thursday to a hotel that also houses asylum seekers and refugees. Immigration officials oversee the hotel, and Djokovic has made multiple requests to be allowed to move to a house he rented for the duration of his planned stay while his visa delay is resolved. Serbian president Aleksandar Vucic said in a public statement he also requested permission, on Djokovic’s behalf, to move to the rental home.

But the tug of war over his visa and the legitimacy of an approved COVID-19 vaccination exemption for the Grand Slam tennis tournament is guiding federal lawmakers.

When the Border Force revoked Djokovic’s visa, he filed an injunction request to block visa cancellation. But his court appearance scheduled listed for Wednesday in the Federal Circuit and Family Court was adjourned until 10 a.m. on Monday in Australia. It’s uncertain whether Djokovic will spend the entire weekend in hotel quarantine.

Morrison said Tuesday while speaking about the country’s COVID-19 outbreak that Djokovic would be on the “first plane out” of Australia if the validity of his medical exemption couldn’t be proven.

Australian Broadcasting Corporation reported Wednesday that Djokovic was not the only paricipant in the Open field to have the validity of his exemption investigated. The same media outlet reported an official for the tournament granted an exemption also was being asked for proof he qualified on legitimate grounds.

All fans attending the tournament in Melbourne must be vaccinated, and over 90 percent of the country has been, Morrison said.

According to a government release, six deaths and 21,997 new cases were reported in Victoria on Thursday, an unprecedented jump many locals blamed on the inability to obtain rapid tests.

A 20-time major winner, Djokovic has not confirmed his vaccination status. But proof of vaccination would have qualified him for entry to Victoria at the border, Morrison confirmed. He said the same rules apply whether “celebrity, politician or tennis player.”

“One of the things the Border Force does is they act on intelligence to direct their attention to potential arrivals,” he said. “When you get people making public statements about what they say they have, and they’re going to do, they draw significant attention to themselves.”

Djokovic and Tennis Australia were informed in November, according to the Sydney Herald, he would not meet “quarantine free” approval and couldn’t meet the national standard created by the Australian Technical Advisory Group on Immunization.

It is unknown how many exemptions were granted through Tennis Australia’s exemption process, reportedly paneled by two independent medical review boards.

Djokovic previously came under heavy scrutiny for failing to social distance or quarantine in a self-created tennis exhibition in June 2020. He was among at least four players who tested positive for the coronavirus and issued an apology for failing to follow proper health guidelines.

The 34-year-old Djokovic is the defending champion at the Australian Open, which he has won nine times. His 20 Grand Slam victories tie him for the most ever with Roger Federer and Rafael Nadal.