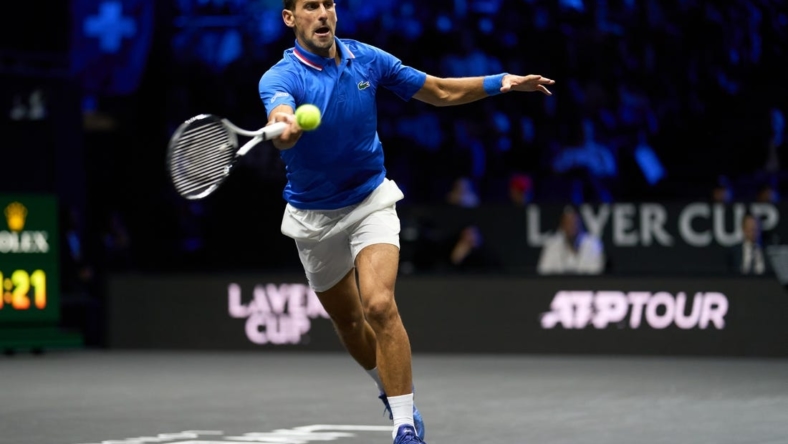 Sixth-seeded Novak Djokovic had 36 winners against 12 unforced errors while outlasting fifth-seeded Stefanos Tsitsipas 6-2, 3-6, 7-6 (4) on Saturday to reach the championship match of the Rolex Paris Masters.

Djokovic had 11 aces without a double fault in the semifinal while winning his 13th consecutive match. The Serbian will face Holger Rune in the title match after the Denmark native rolled to a 6-4, 6-2 win over No. 8 seed Felix Auger-Aliassime of Canada.

“It’s very sweet, obviously, when you win matches like this against one of the best players in the world,” the 35-year-old Djokovic said afterward. “I thought I started the match very well, again, great hitting like (Friday) in the quarters. I had chances early on in the second, (but) I didn’t break his serve. The momentum shifted, the crowd got into it. I think he elevated his level of tennis.

“Deservedly so, we went into — both of us — an even battle all the way until the last point, until the last shot. Some incredible points towards the end. I’m just really glad to overcome this challenge.”

Tsitsipas had nine aces among 27 winners. The Greek made 11 unforced errors.

In the other semifinal, Rune had 19 winners against just seven unforced errors while ending Auger-Aliassime’s 16-match winning streak.

After winning the first set, Rune won the first four games of the second to take control and cruise to the victory.

“It was an unbelievable match from my side today,” Rune said after his triumph. “I really was sticking to the game plan for the whole match and just taking every chance I got. Putting Felix under pressure, that’s what my game plan was all about, and I managed to do it almost perfectly. I am super proud how I handled everything.”

Auger-Aliassime won titles in Florence, Italy; Antwerp, Belgium; and Basel, Switzerland during his hot stretch. He recognized early on that his streak was in jeopardy against Rune.

“I have to give him a lot of credit,” Auger-Aliassime said. “He kind of exposed weaknesses in my game. He was just playing so aggressively without missing. I haven’t seen or I haven’t played many players that were this aggressive and hitting that hard, that deep.”

Djokovic and the 19-year-old Rune have met once previously, when Djokovic won in four sets in the first round of the 2021 U.S. Open.