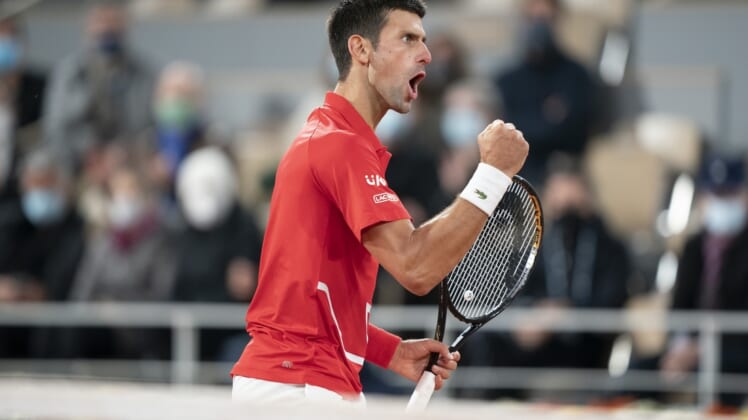 Novak Djokovic advanced to within one win of his ninth Australian Open title after posting a 6-3, 6-4, 6-2 victory over Russian qualifier Aslan Karatsev on Thursday in Melbourne.

Djokovic made just 14 unforced errors — one in the first set — to dispatch the 114th-ranked Karatsev in one hour and 53 minutes. The 33-year-old Serb fired his 17th ace to end the match and advance to his 28th Grand Slam championship final.

“I felt as best as I felt so far in the tournament tonight,” said Djokovic, who improved to 81-8 all-time in the Australian Open. “Physically, mentally. I was hitting the ball very well, mixing the pace. (I) didn’t give him the same looks at all. (I) always kind of kept him guessing and served well when I needed to get out of trouble, late in the second set.

“I’m just very pleased with the performance. It came at the right time, before (the) last match in a Grand Slam (tournament). Being in this situation many times [before] I think helps kind of gather all the necessary elements for me to peak at the right time, which is happening again. I’m obviously very happy about. I’m also happy that I have two days off now. Recovery is still the priority.”

Djokovic will face either fourth-seeded Daniil Medvedev of Russia or fifth-seeded Stefanos Tsitsipas of Greece in Sunday’s title match. Djokovic sports a 4-3 record in head-to-head matches with Medvedev, and a 4-2 mark versus Tsitsipas.

“Regardless of who I face on Sunday, I’m ready for the toughest match of the tournament, without a doubt. Both of these guys are in great form,” Djokovic said of Medvedev and Tsitsipas, who will square off on Friday.

“Medvedev is playing (at) an extremely high (level). He’s on a winning match streak. He’s just the man to beat. On the other hand, Tsitsipas produced some phenomenal tennis last night against Rafa (Nadal). Coming back from two sets down against Rafa (at) a Grand Slam, any Grand Slam, is a huge effort.”

Djokovic is bidding for an 18th major title, which would move him two shy of Roger Federer and Nadal.

Karatsev was attempting to become the first player to reach a Grand Slam final on his major debut. He got off on the wrong foot by committing 13 unforced errors in the first set.

Karatsev finished with 30 unforced errors, but that didn’t dampen his spirits after his magical tour through the tournament.

“It was a great two weeks for me, starting with the qualifying,” the 27-year-old Karatsev said. “It’s a good experience. To play against Novak, helps me to get experience.”