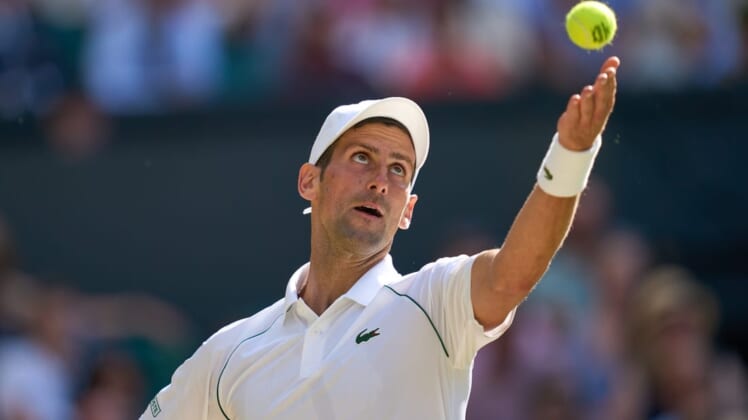 Novak Djokovic rallied from a set down and prevailed in a fourth-set tiebreaker to beat Australian Nick Kyrgios 4-6, 6-3, 6-4, 7-6 (3) on Sunday at Wimbledon, his 21st Grand Slam title.

The win marked the fourth consecutive championship and seventh overall on the grass courts at the All England Club in London for the 35-year-old Serbian. He moved to within one Grand Slam title of Rafael Nadal, who has 22, and one ahead of Roger Federer.

“I have lost words for what this tournament, this trophy means to me, my team, my family,” Djokovic said at the trophy presentation. “I’ve said this many times. It always has been and always will be the most special tournament in my heart, the one that motivated me, inspired me to start playing tennis in a small mountain resort in Serbia where my parents used to run a restaurant.

“I was four or five years old and I saw Pete Sampras win his first Wimbledon in 1992. I asked my dad and mom to buy me a racquet, and my first image of tennis was grass and Wimbledon. I always dreamed of coming here, just playing in this court, and then realizing the childhood dream of winning this trophy. Every single time it gets more meaningful and more special, so I’m very blessed and very thankful to be standing here with the trophy.”

Kyrgios, the fiery Australian known for his booming service game as well as his temper, was in control in the first set, winning points on 81 percent of his serves and hitting 14 winners compared to only four unforced errors.

But in the second set, despite six aces, he won points on only 57 percent of his first serves as Djokovic found his rhythm. In two previous meetings against Kyrgios, Djokovic had never broken the Australian’s serve. But he did to take a 3-1 lead in the second set.

Kyrgios had a chance to even the match, taking a 40-0 lead in Djokovic’s serve in the 10th game, but the Serb fended off four break points.

The composure Kyrgios had in the first set then started to fade away as he became more animated, barking at himself, his box and the chair umpire.

The 27-year-old Kyrgios was making his first run in the quarterfinals at a Grand Slam. A six-time winner on the ATP Tour, he’d never won on a grass court and had his best-ever showing on grass.

In the third set, Djokovic took the Australian to deuce in all four of his service games, including the ninth game, when Kyrgios squandered a 40-0 lead to lose the game, a crucial turn that led to his third-set win.

“He had 40 love and four-all in the third set that game and he just made some double faults,” Djokovic said of his opponent, “He lost that game. I didn’t earn it.”

Djokovic said that at the championship level, it’s just a few points like that one that decide the winner. He said his experience helped him, saying it helped him to stay “mentally tough.”

“It was extremely challenging for me particularly because of his serve,” Djokovic said. “It’s never easy to play a guy like him.”

Kyrgios cashed in only one of his six break point opportunities and made 33 unforced errors compared to 17 — seven of which were double faults — for Djokovic.

“He’s a bit of a god, I’m not gonna lie,” Kyrgios said of Djokovic. “I thought I played well. … It’s been an amazing couple of weeks for me personally.

“Myself, my team, I think we are all exhausted, we’ve played so much tennis. I definitely need a well-earned vacation after this one. I’m just really happy with this result. It’s probably the best of my career. Maybe one day I’ll be here again.”