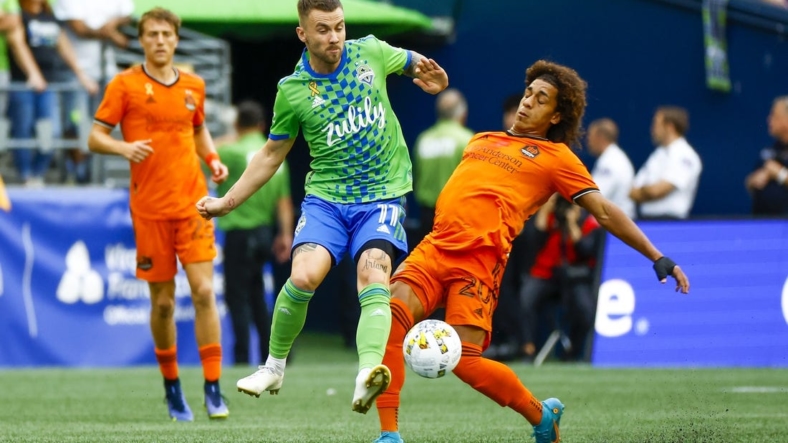 Nouhou scored his first Major League Soccer goal and added an assist as the Seattle Sounders rallied for a 2-1 victory against the visiting Houston Dynamo on Sunday night.

Fredy Montero scored the tiebreaking goal in the 76th minute as the Sounders (11-15-3, 36 points) snapped a five-match winless streak and remained six points behind rival Portland for the Western Conference’s seventh and final playoff berth with five regular-season matches remaining.

Montero’s goal, on a header into the top right corner of the net from the top of the 6-yard box after a cross from the left wing, was his 57th in MLS play for the Sounders, tying teammate Raul Ruidiaz for the franchise record. It came just one minute after Seattle’s Nicolas Lodeiro missed his first penalty kick in 19 career chances, with Dynamo goalkeeper Steve Clark diving to his left to make the stop.

Nouhou, a defender who was making his 136th appearance, tied the score in the 59th minute, sending the crowd into a frenzy.

Ruidiaz received a pass in the middle of the penalty area but his shot from just outside the top of the 6-yard box was blocked by a pair of defenders. The Dynamo’s Teenage Hadebe tried to clear the ball, but it went straight to Nouhou, who put a right-footed shot from 10 yards into the lower left corner of the net.

Steres’ goal came in the 26th minute after a Houston corner kick from the left wing.

Sounders goalkeeper Stefan Frei punched the corner high into the air, with the ball falling to Houston’s Adalberto Carrasquilla at the top of the penalty area. Carrasquilla’s low volley was redirected by Steres from just outside the top of the 6-yard box and into the center of the net, leaving Frei flat-footed.

Seattle had a 20-4 edge in shots, though most were off the mark. Clark and Frei were credited with two saves apiece.