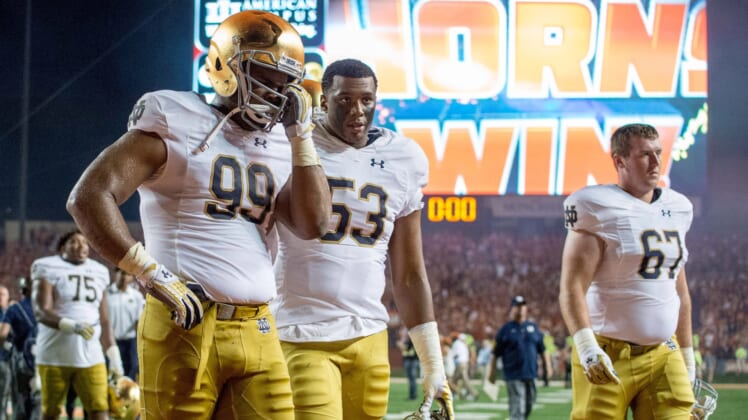 Notre Dame defensive lineman Jerry Tillery became a social media sensation Saturday for all the wrong reasons when he kicked USC’s Aca’Cedric Ware in the head.

The Trojans running back was down and out after a helmet-to-helmet hit that earned Notre Dame safety Nicco Fertitta a 15-yard targeting call and subsequent ejection.

While he was down on the ground, Tillery nudged Ware’s head.

That's not going to help someone who just suffered a brain injury, Notre Dame pic.twitter.com/eQmt1BU47y

In the same game, Tillery also stomped on the foot of USC offensive lineman Zach Banner.

Update: this is the same Notre Dame player who kicked Ware in the head pic.twitter.com/72CN5uXEqe

After the game, Tillery was called out in a big way by teammate and fellow defensive lineman Jarron Jones.

Head coach Brian Kelly told the media that he was going to review the play and have a talk with Tillery.

“Accountability is built within any program. Jerry has to be accountable for his actions every single day. Jerry is a good kid, and if he made a mistake we’ll hold him accountable for that mistake. We’ll take a look at it.”

We’re not sure what prompted Tillery’s vile actions on the field Saturday, but there is no doubt they warrant discipline. Being that Notre Dame is 4-8 and its season is over, however, we’re not sure what that would look like.

One thing is certain, the sophomore defensive lineman earned a very bad rap after what he did against the Trojans.