Notre Dame pulls away to beat Texas in CWS 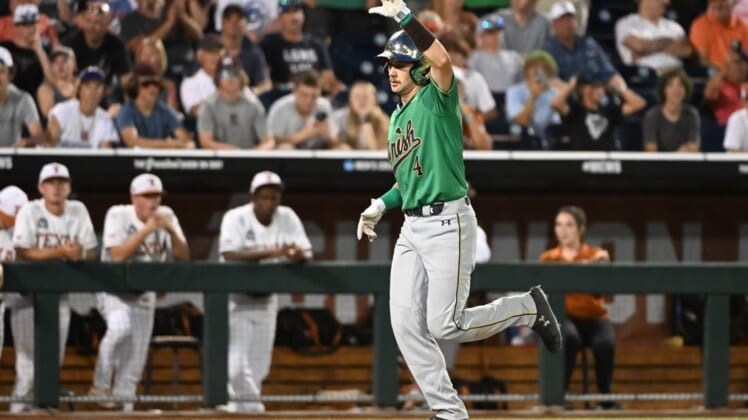 Carter Putz homered and drove in two runs and the Notre Dame Fighting Irish pulled away from a close game by scoring three runs in the fifth inning en route to defeating the No. 9 Texas Longhorns 7-3 in the College World Series in Omaha, Neb.

Notre Dame next will face Oklahoma on Sunday in one of the winner’s brackets of the double-elimination tournament.

Texas next will play Texas A&M in an elimination game. In Friday’s other contest, the Sooners defeated No. 5 Texas A&M 13-8.

Notre Dame left-hander John Michael Bertrand (10-3) allowed three runs on six hits in 5 1/3 innings. He walked one and struck out four. Texas lefty Pete Hansen (11-3) didn’t make it out of the fifth, surrendering six runs on nine hits. He struck out five and didn’t walk a batter.

The Irish led 3-1 going to the fifth, before David LaManna and Jack Brannigan hit one-out singles. Zack Prajzner’s single brought home one run and chased Hansen in favor Tristan Stevens. The right-hander balked, allowing Brannigan to score and moving Prajzner to second. A single by Spencer Myers brought in the final run of the inning.

LaManna, Brannigan, Prajzner and Jared Miller each had two of Notre Dame’s 11 hits. Miller opened the scoring with a solo home run in the top of the first.