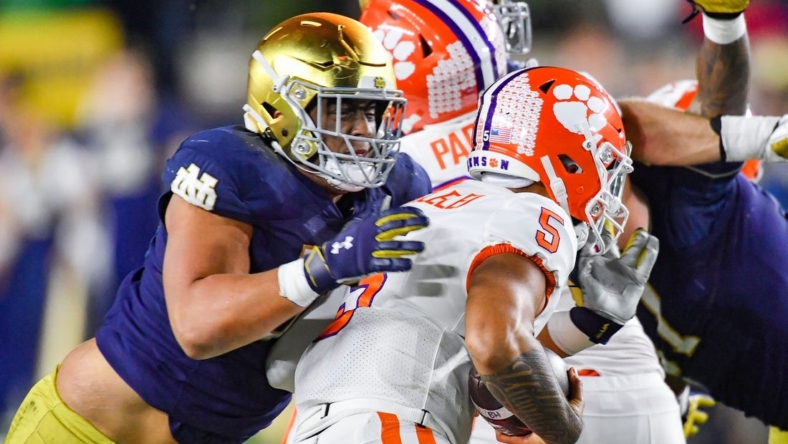 Logan Diggs and Audric Estime each rushed for over 100 yards and Notre Dame got touchdowns from all three aspects of its team Saturday night as it routed No. 4 Clemson 35-14 in South Bend, Ind.

Diggs collected a game-high 114 yards on 17 carries, while Estime rushed for 104 yards on 18 attempts, including a 2-yard touchdown 23 seconds into the fourth quarter that made it 21-0.

The Fighting Irish (6-3) iced the game less than two minutes later when Benjamin Morrison intercepted DJ Uiagaleiei and returned it 96 yards for a 28-0 lead. That was the first time all night that the Tigers (8-1) reached Notre Dame territory.

Uiagaleiei led Clemson to a pair of fourth-quarter touchdowns, even throwing for a 4-yard strike to Joseph Ngata with 1:35 left. Uiagaleiei went 27 of 39 for 191 yards, but it wasn’t enough to keep the Tigers from probably tumbling out of the national championship picture.

Irish quarterback Drew Pyne threw for just 85 yards on 9 of 17 passing, but threw a late touchdown to Michael Mayer and rushed for a 5-yard score with 38 seconds left in the first half to give them a 14-0 halftime advantage.

Notre Dame initiated scoring less than six minutes into the game via the special teams. Prince Kollie recovered a blocked punt and ran it 17 yards for a 7-0 lead.

After Pyne’s late score in the first half, the Irish kept Clemson at arm’s length until blowing the game open early in the fourth quarter with two quick touchdowns. Estime’s score was set up when backup quarterback Cade Klubnik tossed an interception at the Tigers’ 14 on his only pass of the game.

Clemson got 63 rushing yards on 12 carries from Will Shipley, including a 1-yard touchdown plunge with 10:14 remaining in the game.

Notre Dame limited the Tigers to 281 total yards and registered a total of four sacks. It notched seven tackles for loss.