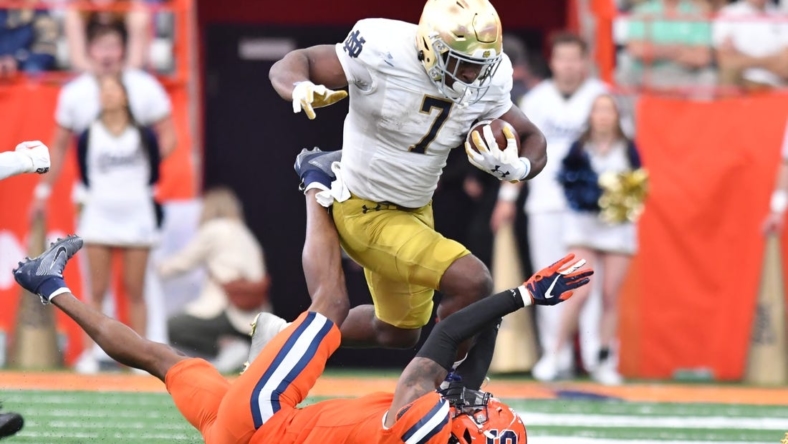 Audric Estime and Logan Diggs combined for 208 rushing yards and three touchdowns as visiting Notre Dame knocked off No. 16 Syracuse 41-24 on Saturday afternoon.

The Orange’s Garrett Shrader completed just 5 of 14 passes for 35 yards before exiting with a concussion in the second quarter. Carlos Del Rio-Wilson came on and was 11 of 22 for 190 yards. Both players threw one touchdown and one interception.

Sean Tucker ran for 60 yards and a touchdown for Syracuse (6-2), which has dropped back-to-back games.

Notre Dame dominated the first half, outgaining Syracuse 225-73 en route to a 21-7 advantage at intermission.

The first play from scrimmage was intercepted by Notre Dame’s Brandon Joseph and returned 29 yards for a touchdown. The Orange answered by taking their next possession 53 yards in seven plays for the tying score — a 13-yard TD pass from Shrader to Oronde Gadsden II — but the Fighting Irish scored the next 17 points to take control.

Midway through the second quarter, Diggs capped an 11-play drive with a 3-yard TD run to create a 14-7 edge for the visitors.

Late in the half, Syracuse failed on a fourth-and-7 from the Notre Dame 39. That set up good field position for the Irish, who found the end zone six plays later as Drew Pyne found Jayden Thomas for a 3-yard score with 17 ticks left until halftime.

However, Estime scored back-to-back fourth-quarter touchdowns to seal the outcome.

First he sliced untouched up the middle for an 11-yard score. Notre Dame then blocked a punt and Estime plunged in from 2 yards out for a 38-17 cushion.