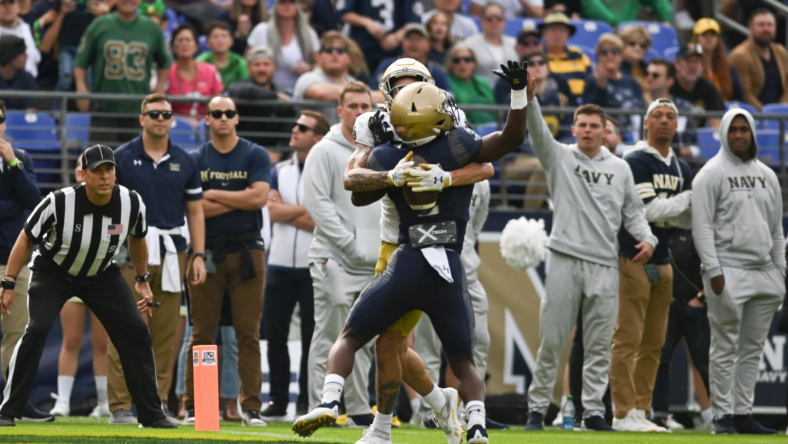 Notre Dame football senior receiver Braden Lenzy made one of the best catches you will ever see in a college football game on Saturday afternoon versus the Navy Midshipmen.

The Fighting Irish got off to a rough start in 2022. They were outworked by Ohio State to start the season, then suffered a shocking loss to Marshall the following week. However, since then the university’s football squad has turned things around.

In their seven games following their Week 2 defeat to Marshall, Notre Dame has won six and scored back-to-back victories against Top 25 teams Syracuse and Clemson the last two weeks. In Week 11, they took a competition step down in the 3-6 Navy Midshipmen. However, that doesn’t mean high-level playmaking wasn’t required to secure a fourth straight victory.

With a couple of minutes left in the opening quarter of the game in Annapolis, Maryland, the Fighting Irish had the ball on the Midshipmen’s 42-yard line already up 7-0. On first down, quarterback Drew Pyne took the snap and quickly received pressure from the Navy pass rush.

It forced Pyne out of the pocket, and after finding some space on the field, the sophomore decided to uncork a bomb of a pass to the end zone. However, when he tossed the ball to receiver Braden Lenzy, he was well covered by an opposing defender. Unfortunately for the Navy that didn’t matter.

In what was a true luck of the Irish moment, Lenzy was somehow able to locate the ball, wrap his arms around the defender, get his hands on the falling pass and pin it against the Navy player’s back. Once in the end zone, he was able to wrangle the ball free and show he had control of the rock, and put six more points on the board for Notre Dame.

Notre Dame football has had many special moments, but Braden Lenzy’s catch on Nov. 12, 2022, will go down as one of the best plays in the storied history of the Fighting Irish.