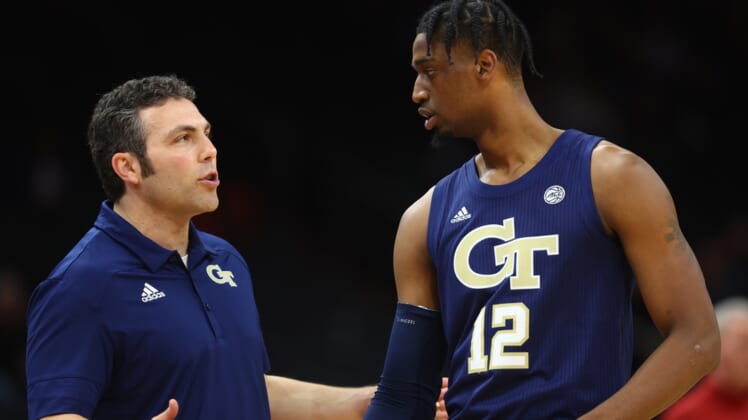 Prentiss Hubb and Nate Laszewski each hit a clutch 3-pointer in the extra session as the Fighting Irish (9-5, 3-1 ACC) won their fifth straight game. Paul Atkinson Jr. chipped in 16 points on 8-of-9 shooting for Notre Dame, while Dane Goodwin had 14 points and Hubb contributed 10 points and nine assists.

Georgia Tech (6-8, 0-4) was paced by Michael Devoe’s 20 points, while Jordan Usher registered 16 points, 14 rebounds and six assists. Kyle Sturdivant (10 points) was the only other player in double figures for the Yellow Jackets, who have dropped seven of their last eight.

With 2:23 left in overtime, Hubb broke a 64-64 tie with a 3-pointer, and Laszewksi drained one of his own from long distance with 1:49 remaining to create a six-point edge for the visitors. Devoe made a pair of foul shots and a driving layup to draw the hosts with 70-68 with 10 seconds left, but Goodwin sealed the victory with a pair of free throws.

Sturdivant made a 3-pointer in the waning seconds of the first half to give Georgia Tech a 35-29 lead at intermission. Atkinson and Wesley each scored 12 first-half points to lead all scorers, with Atkinson going 6 of 6 from the field in the opening 20 minutes.

The Yellow Jackets led 41-35 early in the second half before the Irish scored 11 straight points to jump in front. The teams then jockeyed back and forth with Georgia Tech taking a 61-57 lead on two Sturdivant free throws with 1:41 left in regulation.

Notre Dame rallied to slip in front, 62-61, as Goodwin knocked down a jumper and Wesley connected on a 3-pointer. Dallan Coleman went to the line with a chance to put Georgia Tech ahead with 28 seconds left, but he only made 1 of 2 to forge a 62-62 tie.

Hubb missed a shot to send the game to overtime.