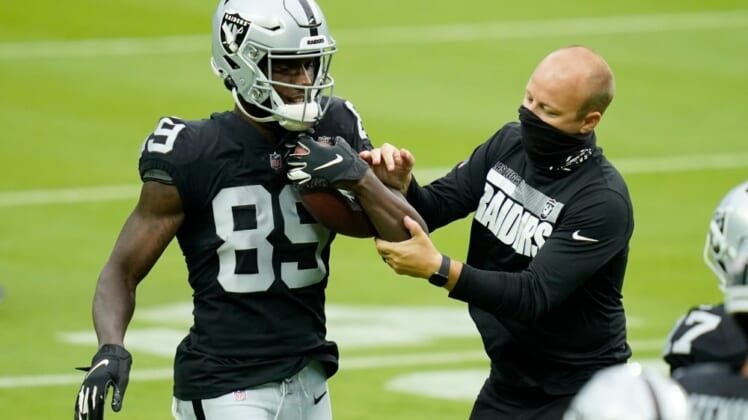 The Tyrell Williams injury is just one of those breaks that come along with a normal NFL season for the Las Vegas Raiders. Replacing Williams isn’t necessarily about finding one other wideout to replace him.

The Las Vegas Raiders can’t catch a break with their wide receiver group as is evident by this week’s news of the Tyrell Williams injury.

On Tuesday, ESPN’s Adam Schefter reported that wideout Tyrell Williams would undergo surgery on a torn labrum in his shoulder, which requires a six-month recovery.

Although the Tyrell Williams injury deals a notable blow to the wide receiver corps, the Raiders have the depth to fill his void. Following the news, many fans asked who’s going to step up? Is it Bryan Edwards, Zay Jones or Nelson Agholor?

The answer doesn’t have to boil down to one player.

The Raiders can fill one of the starting wide receiver spots similar to a running back by committee approach. Each pass-catcher can bring something different to the aerial attack. The coaching staff doesn’t even have to solely rely on a replacement wide receiver either.

Gruden can crack his knuckles, open up the playbook and get his creative juices flowing with a plethora of offensive weapons on the roster. Let’s go through four personnel packages and how the Raiders can attack opposing defenses in light of the Tyrell Williams injury news.

This is the most frequently used personnel package across the league, three wide receivers, a running back and a tight end.

Gruden can simply insert rookie Bryan Edwards into Williams’ spot. According to NFL Insider Adam Caplan, the team expected the rookie third-rounder to take over the veteran’s perimeter ‘X’ position in the near future anyway:

Edwards has been the star of Raiders’ camp. Quarterback Derek Carr compared him to his former Fresno State teammate and Green Bay Packers wideout Davante Adams.

“Bryan is a very violent route runner and that’s a good thing,” Carr said during a media presser. “He’s very violent, he’s very aggressive in his cuts, he reminds me — when the ball is in the air — of [Green Bay Packers wide receiver] Davante [Adams], great ball skills.”

Despite the buzz around Edwards, even before the Tyrell Williams injury, Jones and Agholor can also step into this role. While answering questions from reporters, general manager Mike Mayock praised both veterans, especially the former.

“Could not be more proud of Nelson Agholor and Zay Jones to start with,” Mayock said. “Nelson Agholor is on a mission, and Zay Jones is also. They’re in as good of shape as any two players we have on the team. Their route running for both of them has improved. Their concentration has been outstanding and I think our coaches have a plan for those guys. It starts with those two guys and you say, ‘Wow.’ We can see a huge difference in Zay from last year to this year. I’m proud of the way he came to camp.”

The Raiders should force opposing cornerbacks to prepare for Edwards, Jones and Agholor, divvying up the snaps among the three and riding the hot hand.

In Week 14 of the previous campaign, Foster Moreau tore his ACL, but he made a speedy recovery and practiced at camp:

Gruden can use two wideouts and pair Darren Waller with Moreau or Jason Witten at tight end. All three have the hands to challenge defenses in the middle of the field or in the red zone.

Although Waller is the rising star among the three tight ends, Moreau and Witten finished with more touchdowns last season. A tight end tandem will put linebackers and safeties on high alert.

With the Tyrell Williams injury, multiple tight end sets could be part of the answer. If multiple tight ends take the field, Carr doesn’t have to necessarily target any of them, though three pass-catchers at the position would stress the defense’s second-level coverage.

The Raiders can play bully ball and use their tight ends to open wide canals for running back Josh Jacobs, who’s primed to serve as the workhorse on the ground.

As a rookie, Jacobs ran for 1,150 yards, averaging 4.8 yards per carry with a fractured shoulder for nearly half of his 13 appearances. Now healthy, he can easily eclipse 1,300 rushing yards.

With a stout offensive line and three tight ends on the field, defenders will find it difficult to lay a finger on Jacobs. In this package, he can rack up a ton of yards before contact.

According to Pro Football Focus, Jacobs forced the most missed tackles among ball-carriers last season:

Because he’s a tackle-breaker, the Alabama product would consistently rip off chunk yardage behind the big bodies in the trenches. Many don’t think about the running back room when it comes to replacing some of the production expected out of wide receivers after the Tryell Williams injury, but it’s a spot that can be used to do just that.

How about two pass-catching running backs on the field with Waller and two wideouts?

Jacobs says he wants to catch at least 60 passes, so Gruden can use him and Jalen Richard on the field simultaneously, forcing defenses to guess who’s going to get the ball out of the backfield. If Theo Riddick or Devontae Booker make the 53-man roster, they can also play a role in this personnel package. The former has 285 receptions for 2,238 yards and 14 touchdowns in six seasons. The Tyrell Williams injury could open the door for these running backs to be a truly important cog in the passing machine.

At Alabama, Jacobs showed the ability to catch the football, recording 48 receptions for 571 yards and five touchdowns as part of a running back committee for three terms. Just two years ago, Richard tied with tight end Jared Cook to lead the team in receptions (68). He logged an 84 percent catch rate.

When matched up against a defense with weaker coverage linebackers, hello Tahir Whitehead in Week 1, Carr can target underneath routes to move the ball. Yes, that’s sounds like dinking and dunking, but Gruden doesn’t need to worry about style points. Is it effective? If so, Jacobs and Richard can feast on linebackers who are lost in space or safeties with inconsistent tackling technique.

Not Who But How?

To reiterate, the Raiders don’t have to put the No. 2 wide receiver job created by the Tyrell Williams injury on one man’s shoulders. They have enough talent to include a bevy of pass-catchers at running back, wide receiver, and tight end.

Perhaps in one week, Jones gives them a big game and Richard the next. Gruden will also look at matchups. Can Edwards take advantage of a smaller cornerback? Is the opposing defense down a starting linebacker? If that’s the case, two pass-catching tight ends can attack the middle.

Picture the football field as a chessboard. Slide the bishop across the middle, move the rook down the side, use the knight to maneuver—the variation of skill sets among the Raiders’ offensive weapons can operate in a metaphorical way on the field.

With this approach, Gruden can keep defenses guessing and pull tricks out of his playbook through the entire contest. That would keep the offensive attack fresh in the second halves of games. Replacing the production after the Tyrell Williams injury takes a different level of strategy for Gruden.

Gruden has to play chess—not checkers.