For the first time in their history, the North Carolina Tar Heels and Duke Blue Devils will do battle in the NCAA Tournament.

Following North Carolina’s blowout win over Saint Peter’s, Hubert Davis’ squad will take on Duke in the Final 4 from New Orleans next Saturday.

This comes after the Tar Heels ended Saint Peter’s cinderella run in the Elite 8 on Sunday. Meanwhile, Duke extended the career of legendary head coach Mike Krzyzewski’s career with an Elite 8 win over Arkansas on Saturday.

Some college basketball fans are upset over the fact that this year’s iteration of the Final 4 will include four blue blood programs. In addition to Duke and North Carolina going at it, Villanova and Kansas will play next Saturday for a spot in the national championship game.

But let’s circle back to the North Carolina Tar Heels and Duke Blue Devils going up against one another. The biggest rivalry in college basketball. Two schools seperated by nine miles on old Tobacco Road.

It was back on March 9 that North Carolina spoiled Coach K’s final home game at Cameron Indoor. Said game saw the Tar Heels come out on top by the score of 94-81.

Instead, four different members of the Tar Heel scored 20-plus points in the 13-point win. This pretty much ended Duke’s hopes of earning a No. 1 seed. Rather, the Blue Devils earned the No. 2 seed out west in the same region as the No. 1 team in the country, the Gonzaga Bulldogs.

No one expected Duke to come out the west. And in equally shocking fashion, the Tar Heels were able to come out of the east with wins over Baylor and UCLA.

The season will now come to a culmination for one of these ACC teams Saturday in New Orleans. For Mike Krzyzewski, his career could also come to an end in the Final 4 against a program that has defined his 43-year tenure in Durham. You read that right, 43 years. A total of 1,129 wins and 101 NCAA Tournament wins.

The NCAA couldn’t have asked for a better Final 4 matchup. Two blue blood programs. Two epic rivals. Two programs who have played some of the most memorable regular-season games in college basketball history.

A legendary head coach needing one more win to stave off retirement. A young head coach in the opposite corner looking to prove that he can become a legend for a program that had all-time greats Dean Smith and Roy Williams lead it in the past.

For CBS, this is going to be a ratings bonanza. Potentially, the highest-rated non-title game in college basketball history. The NCAA will take center stage on Saturday with sports fans from all walks of life tuning in. Sports bars filled in this “post-pandemic” era. Yeah, it’s going to be a popcorn-worthy time. 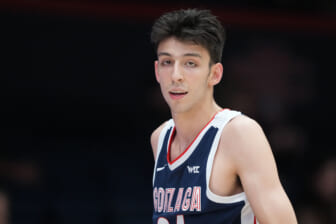