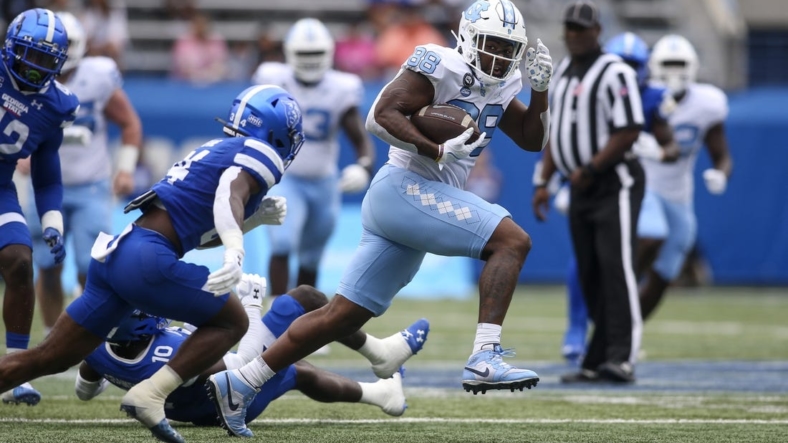 Georgia State had three possessions after North Carolina (3-0) took the lead but had to punt each time.

Georgia State (0-2) has lost both its games to Power Five opposition.

The Tar Heels scored on their first possession when Maye found tight end Kamari Morales for a 55-yard catch and run touchdown. Georgia State answered with a 45-yard field goal by Michael Hayes to cut the lead to 7-3.

North Carolina scored two straight touchdowns, a 7-yard run by D.J. Jones and a 28-yard pass from Maye to Kobe Paysour. Georgia State cut the lead to 21-10 on a 6-yard touchdown pass from Grainger to Kris Byrd.

Georgia State had one more chance before halftime when UNC gambled on fourth-and-2 at its own 39 and Maye was sacked by Jontrey Hunter. But the Panthers were unable to move the ball and Hayes had his 44-yard field goal try blocked by Myles Murphy.

North Carolina answered by scoring in four plays, with Hampton breaking the line and running for a 58-yard touchdown with 33 seconds left in the third to tie the game at 28-28.