North Carolina out to snap losing streak against Virginia 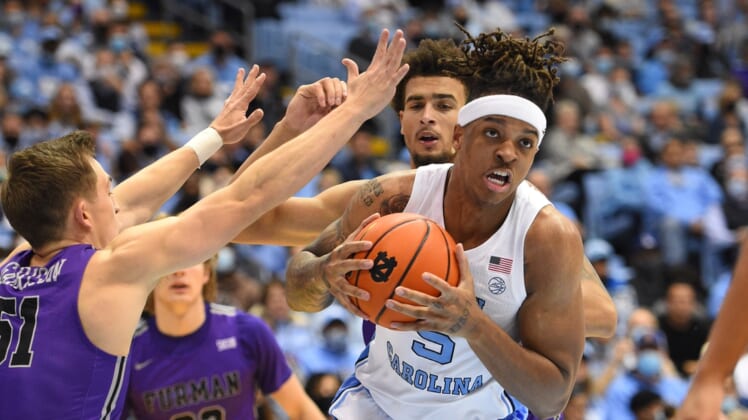 To run or not to run. It’s the perpetual hoops question.

And as it applies to the Atlantic Coast Conference, no two teams are more philosophically opposed than North Carolina and Virginia, who will meet Saturday in Chapel Hill, N.C.

While the Tar Heels push the tempo, the Cavaliers rein it in. Lately in their matchups, slow and steady has won the race as Virginia has beaten North Carolina seven straight times.

The last team to cast such a spell over UNC in its proud history was North Carolina State, which defeated the Heels nine straight times from 1972-75.

“It starts with flying back on defense,” Cavaliers coach Tony Bennett said. “Going against Carolina, that’s always a theme, your ability to make them go against your set defense.”

Virginia enters on an uptick after ACC wins on the road over Syracuse and Clemson. Tuesday’s 75-65 victory was particularly satisfying, considering two weeks earlier the Cavaliers lost to Clemson by 17 points.

In Tuesday’s physical game, 6-6, 246-pound Jayden Gardner (23 points) was a force as he drew eight fouls inside on the Tigers. Kadin Shedrick (eight points, six rebounds, four blocks) and reserve Francisco Caffaro (eight points) also helped the Cavaliers to a 34-22 edge on points in the paint.

More physicality has been a recent emphasis for Virginia and will be key against North Carolina, Bennett said.

“They get offensive rebounds with their size,” Bennett said. “So you gotta be good on the bookends, the front and the back. We’ve gotta play as assertively and as hard as we can.”

The Tar Heels are coming off a 78-73 loss Wednesday night at Notre Dame, despite 21 points and 17 rebounds from Bacot, who questioned his team’s effort afterward.