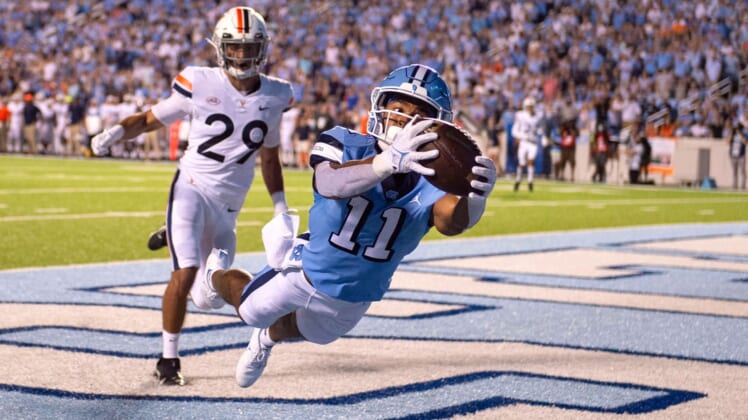 No. 21 North Carolina has its offense rolling and Georgia Tech seems to have figured it out on the defensive side.

That could make for an interesting matchup on Saturday night when the teams collide in Atlanta.

The Tar Heels (2-1, 1-1 Atlantic Coast Conference) have scored 59 points in consecutive games, with the 20-point win last Saturday against visiting Virginia coming in a shootout-like manner.

“We’re getting back on track and we’re getting an identity and we’re more of who we want to be,” North Carolina coach Mack Brown said of the offense.

So now it’s another matchup with a nationally ranked opponent for the Yellow Jackets.

“That team that played (at Clemson), that team can play with anybody,” Georgia Tech coach Geoff Collins.

With that, the Yellow Jackets will have to show they’re capable of revving it up again for what Collins calls “a big-time game” against the Tar Heels.

North Carolina ventures on the road for the first time since its season-opening 17-10 loss at Virginia Tech. The Tar Heels dropped two of their last four road games in 2020, so they should be on full alert for this game.

Quarterback Sam Howell was 14-of-21 passing for 307 yards against Virginia, with five of the completions resulting in touchdowns. He had plenty of help with Josh Downs racking up 203 receiving yards and running back Ty Chandler compiling 198 rushing yards.

“Sam’s playing as well as he has ever played, after we didn’t help him much and had the tough start at Virginia Tech,” Brown said of the season-opening loss.

The Tar Heels ended up with a staggering 699 yards of total offense in the Virginia game.

Georgia Tech has outgained each of its first three opponents. The performance against Clemson came with Collins pointing to several encouraging aspects.

“Now we have to find the next step to win those kind of games,” Collins said. “The next step and the next challenge is to see what the leadership in this program can do with this learning experience and make the most out of it.”

Georgia Tech’s defense received a career-high 13 tackles from senior defensive back Tariq Carpenter. His previous best came three years ago with 10 vs. Virginia.

North Carolina’s defense has forced five turnovers – almost half of the 11 takeaways for the entire 2020 season.

This week’s venue in an NFL stadium — rather than playing on Georgia Tech’s campus — was announced in February for this matchup of Coastal Division teams.

The Tar Heels and Yellow Jackets didn’t meet last year because of the restructured pandemic-based schedule. North Carolina won in 2019 in Atlanta.

This marks the Tar Heels’ lone game away from home across a six-week stretch.

This will be North Carolina’s second matchup with a team from Atlanta in a three-week period. The Tar Heels breezed to a 59-17 win over Georgia State on Sept. 11.