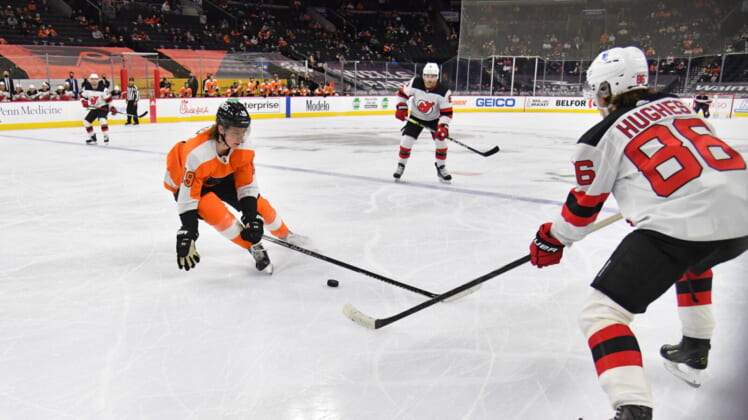 The Vegas Golden Knights have reached an agreement with Nolan Patrick on a two-year contract that will carry an annual cap hit of $1.2 million. Patrick was acquired earlier this offseason from the Philadelphia Flyers in a three-team trade that saw Cody Glass sent to the Nashville Predators.

Nolan Patrick was the last remaining unsigned restricted free agent associated with the Golden Knights and they now have all players on their roster signed to NHL contracts. This means that there will be no training camp drama with players still needing to be signed and instead everyone can focus on their ultimate goal: winning the Stanley Cup.

Nolan Patrick expects to slide into the bottom six and play a solid two-way game for the Golden Knights. While he had just 9 points in 52 games last season, he did begin his career with two straight seasons of at least 30 points. The team hopes that he can find that old form and contribute in all areas of the game.

Nolan Patrick is a former No. 2 overall selection as he was picked just after Nico Hischier in the 2017 NHL Entry Draft by the Flyers. Despite the high draft pedigree, he has largely failed to live up to expectations and now will look for this fresh start to help him rediscover some of that untapped upside.

For the Golden Knights, Nolan Patrick represents a low-risk reclamation project that could pay off in a major way if things turn out well. If the experiment doesn’t work, the Golden Knights didn’t have to give up any major pieces and they can continue moving forward.

Considering he’s still just 23 years old,Nolan Patrick could very well take another leap in his game and turn into a solid contributor or better. However, to this point his career has been characterized by injuries and a failure to live up to the gaudy expectations that accompany his draft position.

He will likely get the chance to play alongside Mattias Janmark and Evgenii Dadonov to begin the season, though the start of training camp will give us a much better idea as to how head coach Peter DeBoer wants to arrange his forward lines.