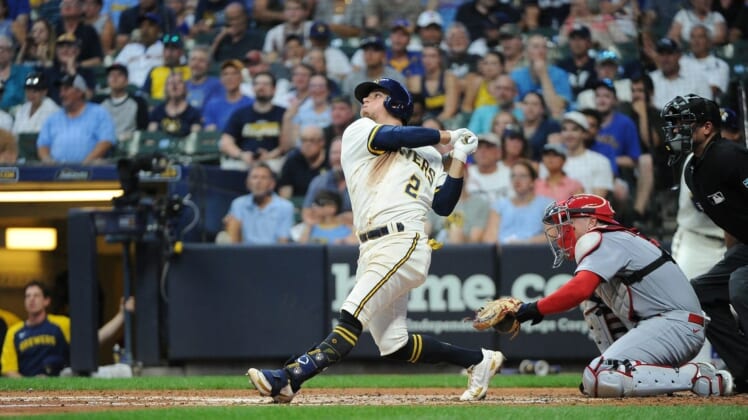 Nolan Gorman hit a pair of solo homers and drove in four runs and the Cardinals bullpen allowed one hit in six scoreless innings to lift visiting St. Louis to a 6-2 victory over Milwaukee on Tuesday night, pulling even with the Brewers atop the NL Central.

Gorman put the Cardinals in front 3-2 in the fourth inning with his fifth homer off recently signed Chi Chi Gonzalez, thrust into a spot start when Aaron Ashby went on the injured list.

Gorman, who went 4-for-4, opened the seventh inning with another homer off Miguel Sanchez to make it 4-2. Gorman also had RBI singles in the first and eighth innings.

The Cardinals added two in the eighth on four singles to push the lead to 6-2 as they evened the four-game showdown at a game apiece.

Four relievers blanked the Brewers in relief of Jack Flaherty, making his second start since opening the season on the injured list with a sore right shoulder. Zack Thompson (1-0) came on in the fourth and pitched 1 2/3 innings for the victory.

The Cardinals scored twice in the first when Brendan Donovan singled with one out and moved to third on Nolan Arenado’s double. Donovan scored on Juan Yepez’s RBI ground out and Gorman followed with an RBI single to right.

Willy Adames brought the Brewers even in the bottom half against Flaherty with his team-leading 14th homer, following a leadoff walk to Christian Yelich.

The Brewers stranded runners at second in both the second and third innings. Flaherty issued consecutive walks to start the third, but recovered to retire three straight.

After that, Milwaukee’s only base runner until Luis Urias’ double in the ninth was Andrew McCutchen’s two-out walk in the fifth.