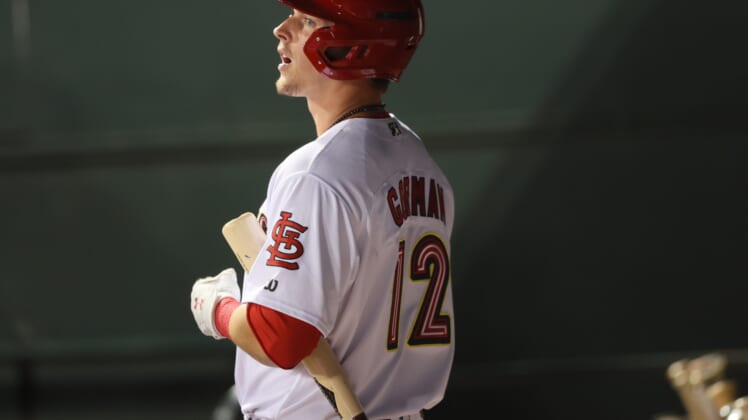 All is going well for the St. Louis Cardinals’ big-league squad, and things are going just as well down on the farm as well. For one, one of their top-rated prospects, Nolan Gorman is off to a red-hot start, playing for their Triple-A minor league affiliate Memphis Redbirds.

The 19th selection in the 2018 MLB Amateur Draft, Gorman has quickly risen up the ranks, where he now plays for the Cards’ top team in the minors, placing the 22-year-old just one step away from making his Major League debut. Gorman, the No. 2 prospect in the Cardinals’ system, also ranks No. 32 among the top 100 prospects in the entire MLB. Based on his recent performance, that ranking may be far too low.

Gorman has seen just 50 plate appearances across 12 games this season, but he’s already managed to crank seven home runs for the Redbirds. The craziest part? They’ve all come in his past seven games, placing him on a hot streak.

While Gorman has always been a power threat, this recent production, coming against AAA ballclubs is the strongest sign yet that his bat likely will play at the highest level as well.

The bigger issue may be finding a long-term, permanent home for which position the talented prospect will play. He’s played 190 games at third base, another 91 at second, and three as a designated hitter. His best fit may be at the hot corner, but the Cards already have a six-time All-Star who also happens to be great in the field.

It may be a while before Tommy Edman or Nolan Arenado are ready to give up their starting role, but when they do need to call on another infielder, Gorman appears up to the task. The Cardinals have since placed a priority on him learning to play second, which he’s played in nine of his 12 appearances, with the others coming at DH.

It’s possible Gorman becomes an eventual trade chip, or maybe the Cardinals get simply get the left-handed hitter into their everyday lineup by allowing him to play DH, mixing in at third when Arenado needs a rare day off.

Whatever the case, Gorman is proving plenty capable, maybe we’ll see him make his professional debut before the year is done. It may not be long before we see Gorman smashing longballs at the MLB level too.