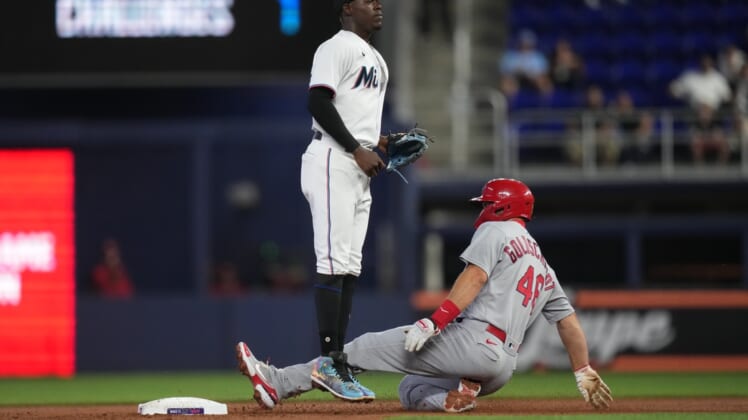 Nolan Arenado slugged a two-run homer in the ninth inning — just off the glove of left fielder Jorge Soler — to lead the St. Louis Cardinals to a 2-0 win over the host Miami Marlins on Wednesday night.

Arenado’s blast against reliever Anthony Bender (0-2) came on a 0-1 pitch that was clocked at 99 mph.

St. Louis has won eight straight games over the Marlins, a streak that started last year. In those defeats, Miami has totaled just seven runs.

The Marlins’ offense was held to just five hits — all singles — and two walks. Miami got the leadoff man on base just once, on Garrett Cooper’s sixth-inning single.

Neither starter earned a decision.

Miami’s Sandy Alcantara was brilliant, striking out six batters in eight scoreless innings. He allowed just four hits — all singles — and one walk while lowering his ERA to 1.86.

Alcantara, who made his major league debut with St. Louis in 2017, is now 0-3 and a dominant 0.99 ERA in four career starts against his former team.

Cardinals starter Miles Mikolas went five-plus innings, allowing four hits, no walks and no runs. He struck out five, hit a batter and reduced his ERA to 1.76.

The Cardinals’ bullpen was sensational as Andre Pallante (two innings), Genesis Cabrera (one inning) and Giovanny Gallegos (one inning) shut the Marlins down. Cabrera improved to 1-0, and Gallegos picked up his third save of the season.

Alcantara struggled a bit through a 27-pitch first inning. He allowed a soft single and a walk to start the frame before retiring the next three batters.

That was the biggest threat until the top of the ninth inning, when Tyler O’Neill fell behind 1-2 to Bender before working a one-out walk. The next batter was Arenado, whose drive went an estimated 379 feet.

It was Arenado’s fifth homer of the year.

In the bottom of the ninth, Avisail Garcia singled with one out and pinch hitter Brian Anderson followed with a walk.

Gallegos then struck out Jacob Stallings and got Miguel Rojas to ground into a force play, putting the Cardinals within one victory of a three-game sweep in the midweek series.