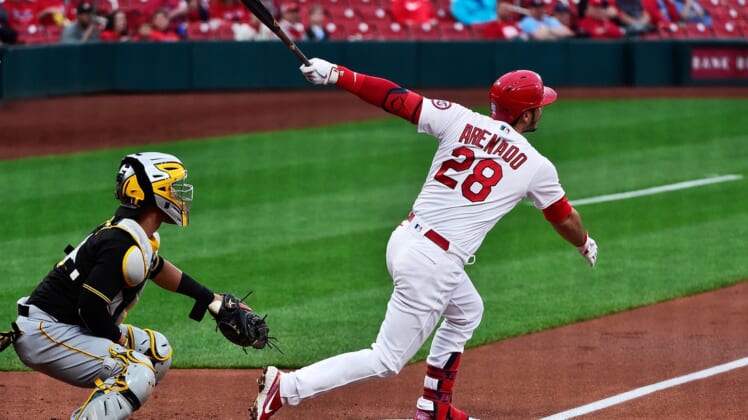 Tommy Edman had a two-run single and Edmundo Sosa hit an RBI double as the Cardinals snapped a three-game losing streak.

The Cardinals took a 2-0 first-inning lead when Arenado followed Dylan Carlson’s one-out walk with his two-out homer to left-center field.

Using small ball, the Cardinals doubled that lead to 4-0 in the second inning.

Carlson lined a single into right field, but Brubaker avoided further damage by retiring Paul Goldschmidt on a fly ball.

Adam Frazier and Kevin Newman hit two-out singles for the Pirates in the third inning, but Gant struck out Bryan Reynolds to strand them.

Arenado drew a leadoff walk in the bottom of the third and Yadier Molina followed with a single. Sosa’s two-out RBI double pushed the Cardinals’ lead to 5-0.

The Pirates cut that lead to 5-2 in the sixth inning.

Newman hit a leadoff double and Reynolds drew a walk. Will Craig smashed a liner off Gant’s glove for a forceout at third base.

Genesis Cabrera relieved Gant and threw a wild pitch to advance the runners. Gregory Polanco hit a run-scoring groundout and Erik Gonzalez followed with an RBI infield single before Cabrera finally retired the side.