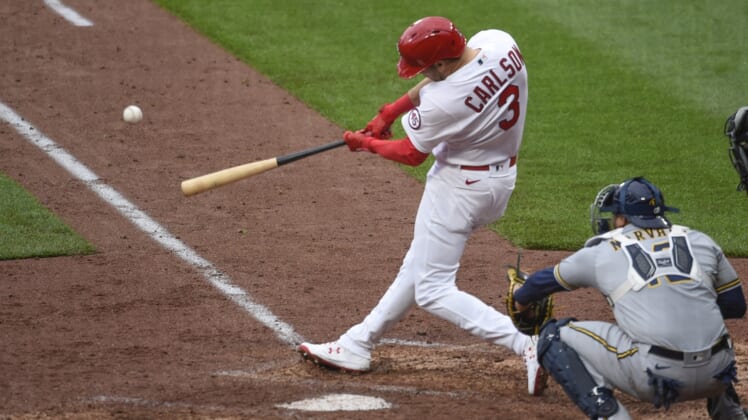 In his first home opener for the St. Louis Cardinals, Nolan Arenado hit the game-winning two-run homer to deliver a 3-1 victory over the Milwaukee Brewers on Thursday afternoon.

Reliever Giovanny Gallegos (2-0) earned the victory and Alex Reyes earned his third save.

His job was made easier by the absence of Cardinals first baseman Paul Goldschmidt, who was sidelined by lower-back soreness. Goldschmidt is 6-for-11 with a double, homer and two RBIs against Burnes in his career.

Adam Wainwright made his sixth home opening start for the Cardinals, tying Bob Gibson for the team record. He struck out six batters and allowed one earned run in five innings.

Ryan Helsley, Andrew Miller, Gallegos and Reyes each pitched a scoreless inning in relief of Wainwright.

Lorenzo Cain tried to unload the bases with a gap shot to left-center field, but centerfielder Dylan Carlson raced to the warning track for the inning-ending catch.

The Brewers scored first when Keston Hiura hit a third-inning double — snapping a 0-for-20 slump — and scored when Wainwright’s pickoff attempt sailed into center field and through the charging Carlson.

The Cardinals tied the game 1-1 in the seventh inning off reliever Eric Yardley. Yadier Molina hit a two-out single and Carlson followed with a double into the right field corner. Justin Williams drew an intentional pass to load the bases, then Tyler O’Neill reached on an RBI infield single. Yardley got John Nogowski to fly out to leave the bases loaded.

After Austin Dean drew a one-out walk against Rasmussen in the eighth, Arenado launched his game-winning homer into the left field seats.