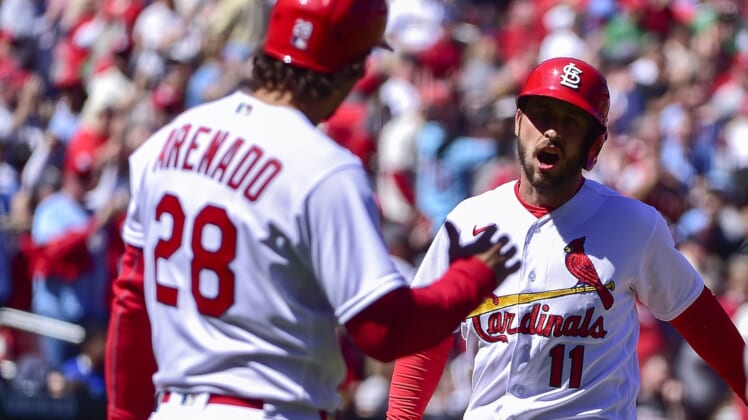 Nolan Arenado went 4-for-4 with three doubles and three RBIs to drive the St. Louis Cardinals to a 6-2 victory over the visiting Pittsburgh Pirates on Saturday.

Paul DeJong hit a two-run homer and Corey Dickerson added an RBI single for the Cardinals.

Yoshi Tsutsugo drove in the Pirates’ runs with a sacrifice fly in the first inning and RBI single in the third. Ke’Bryan Hayes was 2-for-4 with a walk and a run scored after recovering from forearm cramping that knocked him out of the opener in the first inning.

Mikolas struggled with his command in the first inning, throwing 41 pitches as the Cardinals behind 1-0.

The Cardinals tied the game 1-all their half of the inning. Dylan Carlson led off with a single, Tyler O’Neill drew a one-out walk and Arenado hit an RBI double.

O’Neill was thrown out trying to score on Dickerson’s chopper to third base, then DeJong struck out.

Hayes hit a double in the third inning and scored on Tsutsugo’s single to put the Pirates up 2-1. But the Cardinals moved ahead 4-2 lead in their half of the third on Arenado’s RBI single and DeJong’s two-run homer.

The Cardinals pushed their lead to 5-2 in the fifth inning off reliever Roansy Contreras when Dickerson followed Arenado’s double with an RBI single.

Arenado greeted reliever Heath Hembree with an RBI double in the sixth inning to make it 6-2.