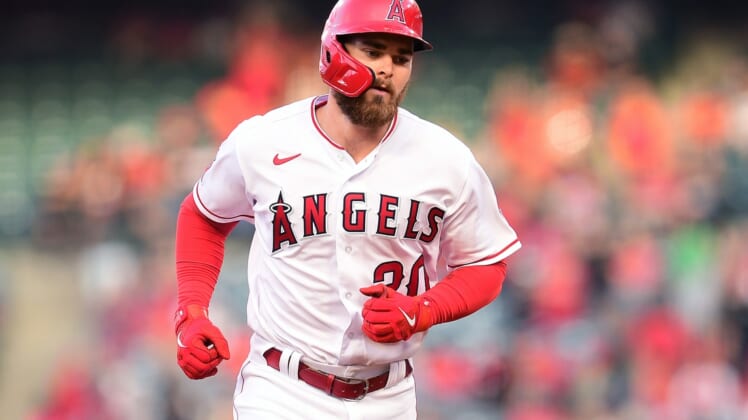 Home runs by Jared Walsh and Mike Trout accounted for the only runs in a matchup of two pitchers returning from Tommy John surgery, lifting the host Los Angeles Angels to a 2-0 victory over the Houston Astros on Saturday night in Anaheim, Calif.

Walsh connected on Justin Verlander’s first pitch of the second inning, giving Los Angeles the only run it needed for its first victory of the season in three tries.

Verlander (0-1) took the loss in his first start since July 24, 2020, but his night was otherwise a success. He gave up one run and three hits and three walks in five innings, striking out seven.

However, the two-time Cy Young award winner was outpitched by another Tommy John project in Angels starter Noah Syndergaard, who missed all of the 2020 season and pitched just two innings at the end of last season.

But the former New York Mets star was up to the task, throwing 5 1/3 scoreless innings and giving up just two hits. It was his first win since Sept. 2, 2019.

Trout hit his first home run of the season and his first in nearly a year (May 4, 2021) in the eighth inning off Astros reliever Ryne Stanek to give Angels closer Raisel Iglesias an insurance run to work with in the ninth. Iglesias finished it off for his first save of the year.

Verlander began the night by striking out Shohei Ohtani leading off the first inning. Trout followed with a deep drive to center field, but Chas McCormick robbed him of a homer with a leaping catch. Verlander finished the inning with a strikeout of Anthony Rendon.

McCormick, though, was unable to do the same to Walsh, who led off the bottom of the second inning by hitting a 93 mph fastball from Verlander well over the fence in center for his first homer of the season and a 1-0 Angels lead.

Syndergaard (1-0) got through the first five innings unscathed, ending a threat in the second inning when he retired catcher Jason Castro on a groundout with two on and two out.

In the sixth, Syndergaard was pulled after walking Michael Brantley with one out. He made 76 pitches.