No rest for weary as Texas A&M opens NIT vs. Alcorn State 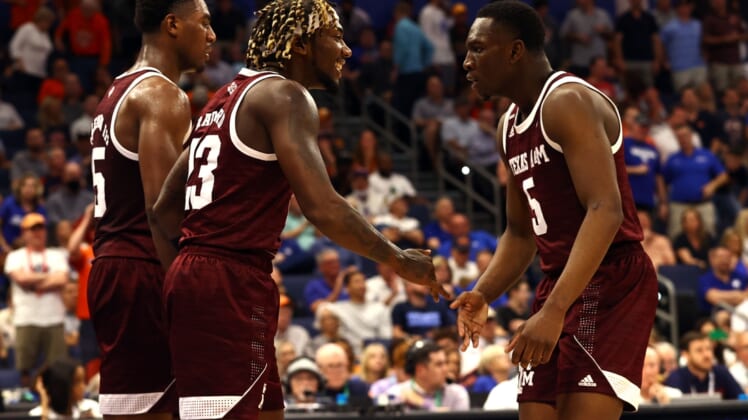 Texas A&M will try to make lemonade out of lemons and continue its impressive late season play when it hosts Alcorn State on Tuesday in the first round of the National Invitational Tournament in College Station, Texas.

The Aggies (23-12) were denied an NCAA Tournament bid despite winning three games in the Southeastern Conference tournament before losing to Tennessee in the final on Sunday. Texas A&M was one of the “first four out” after the NCAA at-large berths were filled and it’s one of the four No. 1 seeds in the NIT.

But the Aggies have little time to dwell on the situation, and maybe the quick turnaround will help salve their wounds.

Tuesday’s game will be Texas A&M’s fifth in a stretch of six days and Alcorn State — which lost in the Southwestern Athletic Conference tournament final to Texas Southern — will demand the Aggies’ full attention.

“We’ll take it one game at a time just like we’ve done all season,” Texas A&M forward Henry Coleman III said after the loss to Tennessee. “We’re not looking ahead. We’re focused on what’s right now, what’s right in front of us, what we can see. We’ll focus on that first game. We’ll focus a lot on us, too. I think we’re a good team.”

Alcorn State (17-16) earned an automatic bid into the NIT by winning the SWAC regular season title for the first time in 20 years. The Braves had won eight straight games before falling 87-62 to Texas Southern in Saturday’s final, a game in which Alcorn ran out of gas, shooting just 28.3 percent from the floor.

“Somebody got to win, and somebody got to lose,” Alcorn State coach Landon Bussie said after the setback. “I’m just happy to be in this opportunity, and I am excited and proud to see how my guys got out and fought and competed all season.

“My expectation is to be right back in this situation next year, and hopefully, we can get a better ending result.”

The programs have faced off three times, with the Aggies holding a 3-0 advantage that includes a 56-44 win in their most recent matchup in 2011.