No place like home as Nashville SC upends RSL 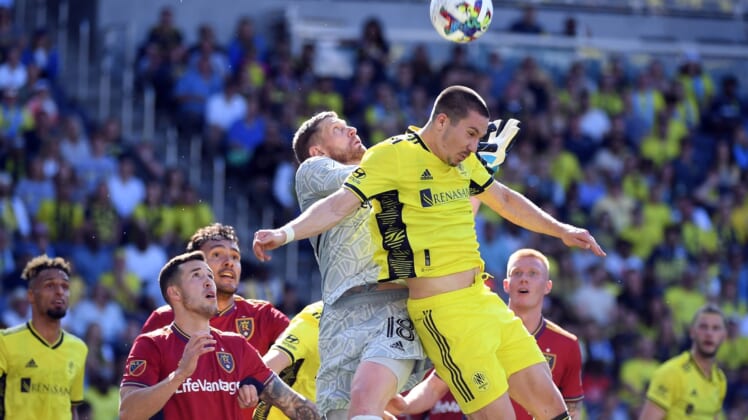 Dave Romney scored midway through the second half to end a scoreless tussle and Nashville SC secured their first victory in their new stadium, defeating visiting Real Salt Lake 2-0 on Sunday.

C.J. Sapong scored in extra time to seal the outcome.

Romney’s goal came in the 63rd minute following a set piece, with his quick reaction allowing him to convert off a rebound. His left-footed shot from near the center of the box went into the left side of the net out of the reach of Real Salt Lake goalkeeper Zac MacMath

Nashville SC (4-3-3, 15 points) snapped a three-game winless streak that included a pair of draws. Real Salt Lake (4-3-4, 16 points) was shut out for the fifth time this season.

It was the second game at Nashville SC’s new home venue. A week earlier, the team played a 1-1 draw with Philadelphia Union in the stadium’s debut.

The goal was Romney’s second of the season, with the other for the defender coming April 9 at Sporting Kansas City.

His latest goal came right after teammate Walker Zimmerman’s shot from close range was blocked. The ball bounced toward Romney and he was in position to finish.

Sapong’s goal came from the center of the box with an assist to substitute Luke Haakenson, who put a pass in an ideal spot for Sapong to convert.

Nashville SC held the upper hand throughout most of the game. By the end, they held a 10-2 edge in shots on goal, a 21-6 advantage in total shots and 6-4 advantage in corner kicks.

A week earlier, Nashville SC outshot Philadelphia Union by 15-10 and in two games it has taken 36 total shots, compared to 16 for their opponents.