No, Klay Thompson is not leaving the Warriors for the Lakers 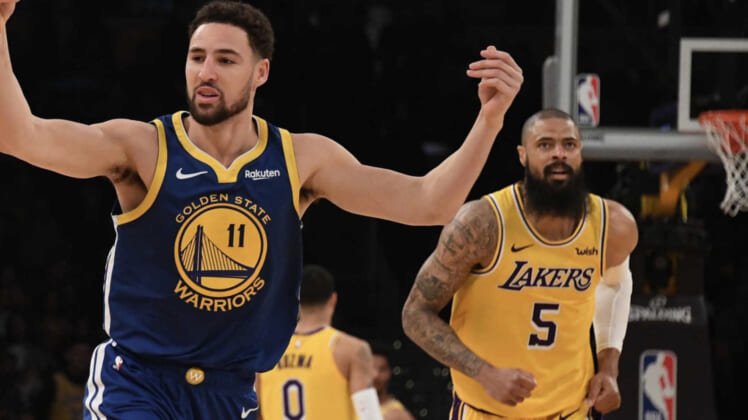 LeBron James wants to form another super team with the Los Angeles Lakers. Every NBA fan outside of Northern California wants to see the Golden State Warriors’ dynasty come to an end.

These are the two backstories leading to a ridiculous narrative that Klay Thompson will leave Golden State for the bright lights of Southern California in free agency.

Say it with us. Klay. Thompson. Is. Not. Leaving. The. Warriors. Klay isn’t leaving the Warriors in a house or with a mouse. He won’t be sending James a box or a fox in a box.

He will not be departing the dynasty that he helped build to latch on as just another player with LeBron James.

Klay Thompson has said as much. His father — a current broadcast with the Lakers (of all teams) — has also said as much. For their part, the Warriors’ ownership group has indicated that it will do everything to keep this core group together.

So about that narrative of Klay somehow leaving his Splash Brother in crime — Stephen Curry — hanging. Well, it’s just not happening.

That’s not happening. Outside of a massive luxury tax hit — one the Warriors can afford to take with the Chase Center in San Francisco on the horizon — there’s nothing that suggests the powers to be in Northern California won’t offer Thompson a max extension.

Why? It’s simple for those who bought into this ridiculous narrative like it were somehow akin to reports being gold-plated bowel movements.

Let’s say it louder for those in the back sporting tin-foiled Lakers gear.

Golden State signing Thompson to a max extension is what we’re going to see during the summer time. In turn, Thompson will help continue a dynasty that has seen the Warriors pounce on their Southern California counterparts over the past several seasons.

A starring role in Space Jam or House Party won’t change this. VIP treatment in Hollywood won’t change this. After all, Warriors owner Peter Guber is legitimately one of the VIPs of Hollywood, and he’s looking to bring that with him to the Chase Center.

The Lakers can go after Anthony Davis. They can add Kyrie Irving. That’s fine. It will create more drama in the NBA’s Western Conference.

But Klay Thompson is not departing the Warriors to be LeBron James’ lap puppy. Let’s end this thought process right now before it turns even more ludicrous than the existence of LaVar Ball.