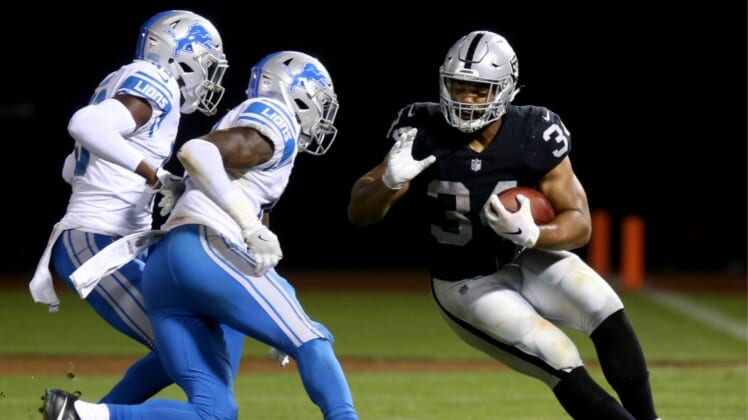 The second Jon Gruden era got off to a most impressive start in Oakland on Friday night. Here’s a few quick hits from the Raiders Preseason Week 1 outing.

There he was. Jon Gruden back on the sideline for the Oakland Raiders – scowling, screaming at referees, and bringing back a big-boy offense back to the Raiders organization. No scoops of vanilla offense for Chucky. The ghost of the Todd Downing offense exorcised quickly and without ceremony. Here are a few key notes from last night’s first outing of 2018.

Well hello Chris Warren III. The undrafted free agent (touted about six weeks ago by most Silver and Black Today on CBS Sports Radio 1140-AM co-host Matt Gutierrez), turned heads with an impressive performance. Warren rushed for 86 yards on 13 carries including a whopping 3.6 yards after contact per attempt. It was one of the top highlights of the game for the Raiders to be certain. Warren is pushing to make the roster, which will most likely consist of three running backs  – Marshawn Lynch, Doug Martin, and either Warren, DeAndre Washington, or Jelan Richard.

Speaking of Washington…he also had a good night despite only six carries. Washington tallied 5.3 yards after contact per attempt. We all know how Gruden loves bruising backs.

Conor Cook looked confident and in control against Detroit.

Could Connor Cook be living up to the hype of three years ago? Cook looked great finishing 11-of-19 with 141 YDS, and the game’s only touchdown. As good as the numbers are, what was more impressive was Cook’s overall comfort level in the offense. He looked relaxed and in command throughout his time on the field. We’ll see if it holds up with increased competition and play against more stout units.

The Kolton Miller watch started off with fanfare as Lynch broke an apparent 60-yard touchdown through Miller’s side just four plays into the game. Alas, the rookie was called for a questionable hold and the touchdown was negated.

According to Pro Football Focus, linebacker Marquel Lee was the highest rated defensive player for the Raiders on Friday night. Lee finished with a 91.2 grade thanks to four run stops in just seven snaps. Lee was also 5-of-5 on tackles.

Ministers of the Interior

For years the Raiders have lacked that big push inside. With the addition of Mo Hurst and PJ Hall in the inside of the defensive line, Raiders fans are excited for the first time in a long time and they have good reason to. On Friday, the H&H Brothers did not disappoint. Hall had one sack and batted down a pass in 11 pass rush attempts, and Hurst had two pressures.

With Gareon Conley unable to play in the game due to his continued health issues, rookie cornerback Nick Nelson was given ample opportunity to show what he could do. He did not disappoint. The rookie was targeted by Detroit eight times and allowed five receptions for just 0.89 yards per coverage snap, according to PFF. That accounts for a 70.8 passer rating on targets into his coverage.

Thanks to the 100+ folks who came out to Lagasse’s Stadium at The Palazzo Las Vegas for the exclusive Silver and Black Today/Sports Adrenaline Las Vegas Raiders game watch party. Former Raiders players Roy Hart and Linden King were on hand and we think almost everyone walked away with a prize from our drawing – including Raiders hats, pins and T-shirts. Thanks again for supporting us and for bringing #RaiderNation out in force!

TOMORROW: Catch the Silver and Black Today show which airs every Sunday from 8am-10am in Las Vegas. It can also be streamed live worldwide on the Radio.com app. You can watch a live video simulcast on our Facebook, YouTube, Periscope, or Twitch.tv channels as well.