No. 9 USC fends off Cal behind Caleb Williams’ 5 TDs 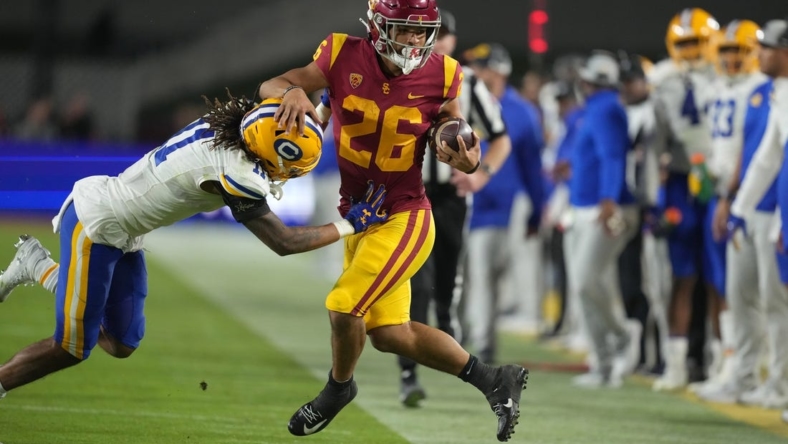 Caleb Williams passed for four touchdowns and rushed for a fifth, and host No. 9 Southern Cal survived a second-half scare to outlast Pac-12 Conference counterpart Cal 41-35 Saturday in Los Angeles.

The Trojans (8-1, 6-1 Pac-12) extended their lead to 34-14 in the third quarter when Williams connected with Tahj Washington on an 8-yard touchdown pass. The game shifted quickly from there.

Michael Luckhurst’s placement up the middle worked as Cal recovered.

The Golden Bears cashed in on a touchdown in 10 plays, converting three third downs in the process. Plummer threw 3-yard scoring strike to Jeremiah Hunter, pulling the Golden Bears to within a possession despite giving up a Nick Figueroa block on the ensuing extra-point kick.

Williams wasted no time responding, starting USC’s next drive with a 29-yard dime to a sliding Michael Jackson III. The Trojans moved 77 yards in a little more than three minutes, with Williams capping the drive on a short touchdown pass to Lake McRee.

The Golden Bears answered once more, this time converting both a third-and-10 and a fourth-and-2 before Jaydn Ott rushed in a goal-line touchdown. Plummer connected with Monroe Young for a successful 2-point conversion.

Cal forced a third down on the ensuing possession with a chance to regain possession, but Williams called his own number on the critical down and broke a 15-yard run that effectively sealed the win.

Williams finished 26-of-41 passing for 360 yards and carried seven times for 38 yards. Travis Dye finished with a game-high 98 yards on 15 carries and scored a touchdown.

Plummer went 35-of-49 passing for 406 yards and threw all three of his touchdown passes in the second half. Hunter led Cal with six catches for 102 yards.

Jackson caught five passes for USC and finished with a game-high 115 yards and two scores. Washington had seven receptions for 112 yards and the TD.

With the win, the Trojans matched their best start since 2008.