No. 9 Purdue tips off postseason vs. Penn State 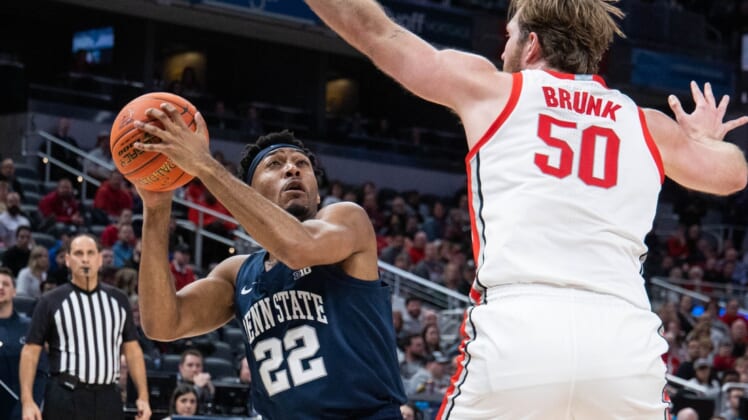 An untimely rough patch kept Purdue from winning the Big Ten regular-season title, but the ninth-ranked Boilermakers are still confident about making a successful run during the conference tournament.

Meanwhile, Penn State apparently has found its form at the Big Ten tournament.

Looking to improve on their recent play in the event, the third-seeded Boilermakers face the 11th-seeded Nittany Lions in quarterfinals on Friday at Indianapolis.

For a good chunk of the season, it looked as if Purdue (25-6) was the class of the Big Ten. However, the Boilermakers finished 4-3 down the stretch, and they dropped back-to-back games at Michigan State and then-No. 10 Wisconsin — each by three points — before edging rival Indiana 69-67 on Saturday.

When the regular-season dust settled in the Big Ten, Purdue finished third, but still in good shape to add a second league tournament title with a double bye into the quarterfinal round. The Boilermakers’ lone Big Ten tournament championship came in 2009, but they were runners-up in 1998, 2016 and 2018.

Purdue will be looking to snap a three-game losing streak in the tournament and is still susceptible to some defense lapses throughout contests. Through Wednesday, the Boilermakers ranked 166th nationally in scoring defense (68.8 points per game) and 185th in effective defensive field-goal percentage (49.7).

However, they Boilermakers have won three straight and 26 of the last 30 vs. Penn State (14-16), and all three meetings in the conference tournament. Williams, who had 21 points and nine rebounds during Purdue’s 74-67 road victory over the Nittany Lions on Jan. 8, has averaged 15.5 points with 8.8 boards in his past four games against Penn State.

The Nittany Lions, though, have looked strong through two games in Indianapolis. They entered the tournament losers in three straight, but posted 36 second-half points to beat 14th-seeded Minnesota 60-51 on Wednesday, then rallied from a nine-point, second-half deficit by shooting 61.5 percent over the final 20 minutes Friday in a 71-68 triumph against sixth-seeded Ohio State.

“We got some tough guys,” Nittany Lions coach Micah Shrewsberry, whose squad held Ohio State nearly seven minutes without a field goal during the second half, told the Big Ten Network. “They never gave up. (They) always fight.

“Stay the course, play the right way. Then eventually we start heading in the right direction.”

Penn State’s Sam Sessoms (11.7 ppg) scored 18 points on 7-of-12 shooting Thursday, and he has averaged 15 points in the past three games. Teammate Jalen Pickett (13.2 ppg) has totaled 38 on 15-of-25 shooting in the tournament. Pickett had 21 points and 10 assists during the loss to Purdue in January.

The only time Penn State won three straight at the Big Ten tournament came in 2011, when the Nittany Lions made their only finals appearance. Ohio State beat Penn State in the final that year.