No. 9 Oregon expected to stick with QB Anthony Brown against Cal 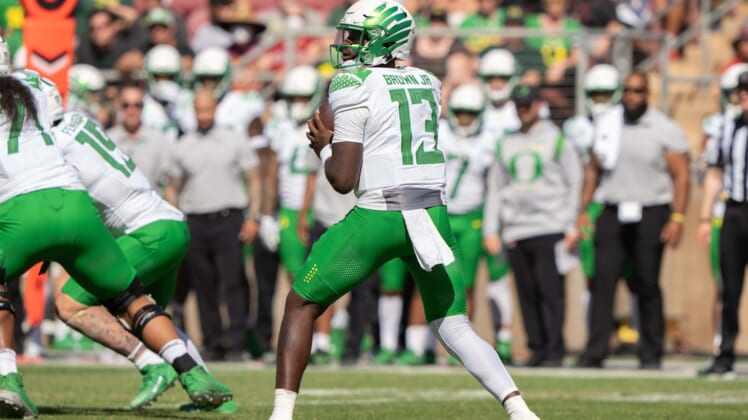 The Oregon Ducks had a full weekend off to rest up, heal up and try to get beyond a disappointing upset loss to Stanford on Oct. 2. That loss, coupled with results of a wild weekend in college football, sent the Ducks down to a No. 9 national ranking.

They’ll get back on the field Friday night at home against Pac-12 North rival California at Autzen Stadium, but without two key players. Leading rusher CJ Verdell is out for the season after suffering an apparent leg injury against Stanford, and defensive back Bennett Williams will also miss the rest of the season after surgery for a broken fibula.

Travis Dye looks likely to step in as the lead back with Verdell out.

Oregon (4-1, 1-1 Pac-12) will also be without star defensive end Kayvon Thibodeaux for the first half of Friday’s game, after he was ejected for targeting late in the Stanford game, a 31-24 overtime defeat.

Offensive coordinator Joe Moorhead was not calling plays against Stanford as he was in a hospital for a non-COVID-related procedure. If he is not ready to resume duties, running backs coach Jim Mastro will do so for another game.

After the Stanford loss in which he did not throw a touchdown and was intercepted once, there had been talk of turning from starter Anthony Brown to freshman Ty Thompson going forward. But Oregon head coach Mario Cristobal didn’t seem ready to make the switch.

“(Brown) certainly gives us the best chance to win,” Cristobal told USA Today. “He’s done enough in practice, he’s done enough in games. I think a lot of times when you have a game like this and things don’t go well, it pours on people. … Anthony has shown a lot, and he’s done a lot of good things in a lot of different ways. He’s going to improve and get better.”

Brown threw his first interception of the season, but Cal’s Chase Garbers has five and is facing a ball-hawking Oregon secondary. The Golden Bears (1-4, 0-2) also had a bye last week, but lost two straight prior to that.

Still, Cal stunned the Ducks in Berkeley last season 21-17 with Garbers running the offense, and the Pac-12 has already seen its share of surprising game results in 2021.

The win over Oregon last December was the last time the Golden Bears won a conference game.

“Last year was last year, and we’re focused on playing better as a team,” Cal head coach Justin Wilcox told Sports Illustrated. “That’s what we need to do. I don’t feel like the guys are lacking confidence. We just haven’t finished games.”

Garbers has 1,245 passing yards and seven touchdown passes on the season, but the Cal defense is allowing 281.4 passing yards per game and has given up 12 passing touchdowns.