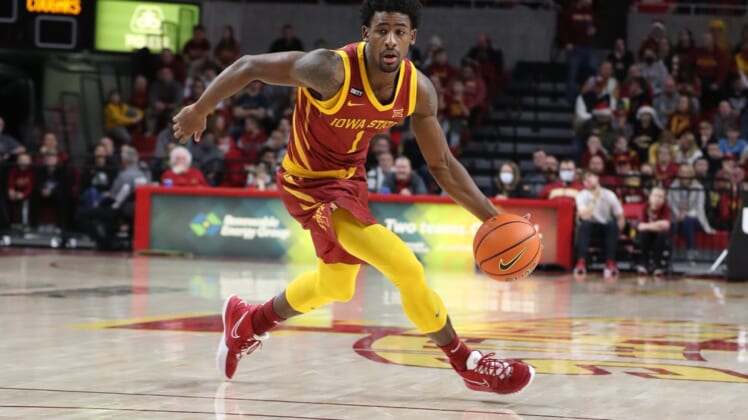 Tristan Enaruna and Izaiah Brockington both logged double-doubles and the offense dished 19 assists as No. 9 Iowa State remained unbeaten with a 79-48 victory against visiting Chicago State on Tuesday night in Ames, Iowa.

Brockington recorded game highs of 20 points and 13 rebounds, while Enaruna scored a career-best 19 points to go with 10 boards.

Iowa State surrendered the first basket of the night but never trailed thereafter, surging ahead by as many as 31 points with 7:55 to go. The Cougars (4-8) responded by scoring the game’s next 11 points, but the early deficit proved too much as the team lost for the third time in four games.

Ranked in the Top 10 for the first time since the 2015-16 season, Iowa State extended the torrid start under first-year coach T.J. Otzelberger, whose Cyclones improved to 12-0.

Iowa State next will aim to improve its standing when No. 1 Baylor visits Hilton Coliseum on Jan. 1.

Brockington’s double-double marked his sixth of the season and second in three days following a 17-point, 11-rebound effort against Southeastern Louisiana on Sunday.

With 12 and 10 points, respectively, Brockington and Enaruna led a balanced attack that sparked the Cyclones to a 34-23 halftime lead.

The Cougars struggled to 28.6 percent shooting (8 of 28) in the first 20 minutes but still played even with Iowa State in points in the paint while scoring more points off turnovers than the hosts before the break.

Iowa State improved to 9-0 all-time against Chicago State in the schools’ first meeting since a 42-point Cyclones’ victory in 2015. Last season’s matchup was canceled as Chicago State had an insufficient number of players.

The Cougars faced the Cyclones as scheduled after postponing Sunday’s game at Drake due to COVID-19 concerns within the program.