No. 9 Creighton nips No. 8 San Diego State in OT 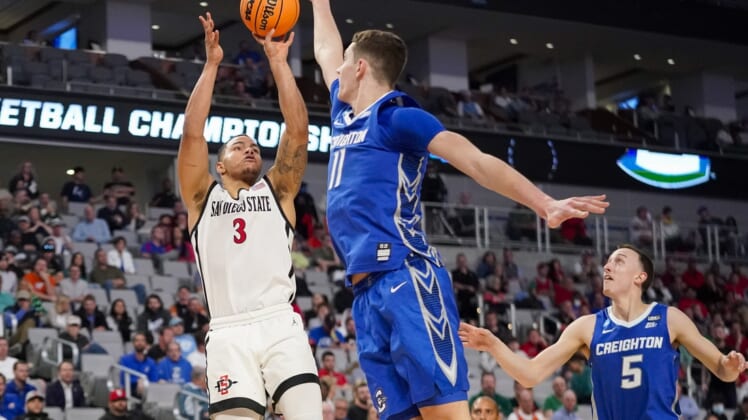 Freshman guard Trey Alexander scored seven of his game-high 18 points in overtime as ninth-seeded Creighton rallied past No. 8 San Diego State 72-69 in the first round of the NCAA Tournament’s Midwest Regional on Thursday night in Fort Worth, Texas.

Ryan Kalkenbrenner added 16 points and 10 rebounds for the Bluejays (23-11) before he suffered a left knee injury midway through overtime and was helped from the court.

Alex O’Connell added 15 points, Arthur Kaluma scored 12 and Ryan Hawkins had 10 for Creighton, which will play either Kansas or Texas Southern in the second round.

The Bluejays used a 9-0 run over the final 2:28 of regulation to force overtime. Alexander made a jumper in the lane to tie the score at 62-all with 11.2 seconds left.

Bradley was fouled while driving to the basket with 6.4 seconds to go but missed the ensuing free throw.

Alexander made a baseline jumper 19 seconds later, then was fouled while driving for a basket with 1:07 left and converted the foul shot to give Creighton a 71-69 advantage.

The Bluejays’ KeyShawn Feazell made a free throw with 0.8 seconds left for the final margin. It was the only point scored by the Creighton bench, as the Aztecs’ reserves enjoyed a 30-1 scoring advantage.

With starting point guard Ryan Nembhard, the Big East freshman of the year, sidelined because of a broken wrist, the Bluejays struggled to take care of the ball in the first half, falling behind by as many as 14 points at 35-21.

Baker-Mazara scored 15 of his 17 points in the first half.