No. 9 Clemson wary of talented Miami 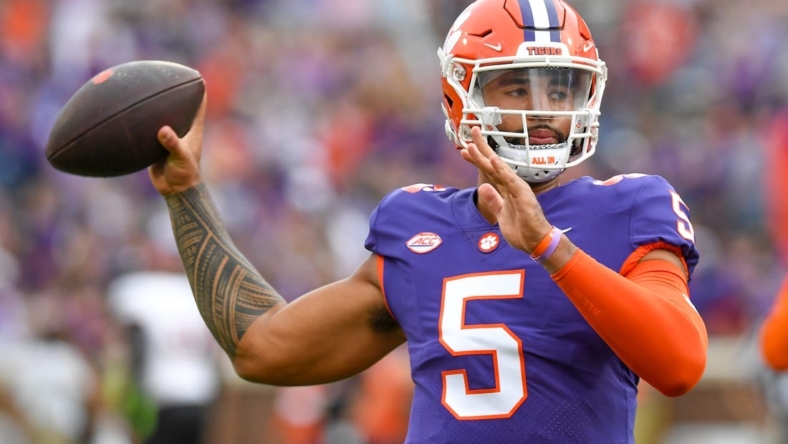 Clemson coach Dabo Swinney remarked Miami is one of those teams that just looks different getting off the bus. Now it’s up to the Tigers to be ready when the upset-minded Hurricanes show up Saturday with the No. 9-ranked Tigers in their sights.

“Make no mistake. They have some dudes. They can get off the bus with anybody,” Swinney said.

Clemson’s goal is to enhance the playoff chances that faded two weeks ago at Notre Dame. Miami (5-5, 3-3) wants to move into a more comfortable postseason position.

The Tigers are hoping to build on momentum from last week’s bounce-back win over Louisville when it entertains Miami in an Atlantic Coast Conference matchup Saturday afternoon in Clemson, S.C.

The Tigers (9-1, 7-0 ACC) moved up a spot to No. 9 in this week’s College Football Playoff rankings. The Tigers have two games to sway selection committee members. They are at South Carolina on Nov. 26 to finish the regular season.

They also will need some breaks to fall their way to get one of the top four spots in the playoff field for the seventh time after starting November with a 35-14 loss to the Fighting Irish.

With the SEC loaded and two Big Ten teams in the top four, there is much to be sorted out in Swinney’s estimation. The Tigers can only pounce on an opportunity to move back up if they avoid another late-season loss.

The Top four teams in the CFP rankings – No. 1 Georgia, No. 2 Ohio State, No. 3 Michigan and No. 4 TCU – are the only undefeated teams, though the final number will be no more than three with Ohio State and Michigan meeting in the regular-season finale on Nov. 26. The Tigers also have to navigate their way past a couple of 9-1 teams in No. 5 Tennessee and No. 7 USC and two 8-2 teams in No. 6 LSU and No. 8 Alabama.

“You don’t ever want to lose,” Swinney said, “but it’s human nature when you lose one late people look at it differently.”

The Tigers handled Louisville 31-16 last week for their 39th consecutive home victory, the longest such streak in ACC history.

“We managed the failure well,” Swinney said of their response to the loss to the Irish. “Now we’ve got to manage the success well.”

The Hurricanes are coming off their most impressive performance this season, beating Georgia Tech 35-14 last week. True freshman Jacurri Brown rushed for 87 yards and threw for three touchdowns – one on his first drive to end Miami’s nine-quarter touchdown drought – in his first collegiate start.

“He brought great energy to the team,” Canes coach Mario Cristobal said. “You know, when you’re a true freshman and you get the nod like that, and the first drive is a successful, that brings some pretty good juice and energy.”

Brown will start, but Cristobal said Tyler Van Dyke (shoulder) is “right at the cusp” of being available this week. Cristobal also is hopeful of getting leading rusher Henry Parrish Jr. (583 yards) back from the undisclosed injury that sidelined him last week.,

Clemson also has injury issues. Swinney said that junior defensive back Malcolm Greene (two starts) will need surgery for a groin injury and miss the rest of the season. Safety Tyler Venables (hamstring) remains out, but surgery won’t be required.