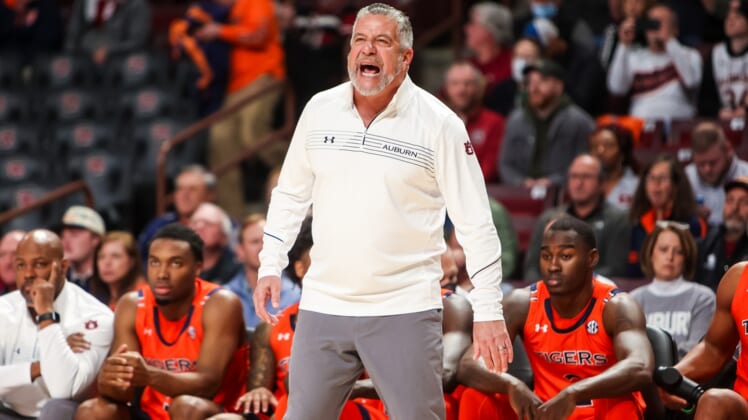 Wendell Green Jr.’s season-high 22 points sparked No. 9 Auburn to an 81-66 victory over host South Carolina on Tuesday in Columbia, S.C.

Green, who also had five rebounds and five assists, was strong throughout but especially in the first 20 minutes. He totaled 14 points, five rebounds and two assists to help the Tigers to a 44-29 halftime lead.

Auburn shot 52.7 percent from the field and got 40 points from its bench.

Erik Stevenson turned in a strong outing with a game-high 25 points, five rebounds and four assists, but South Carolina (9-4, 0-1) dropped its SEC opener and lost for the first time at home.

Wildens Leveque recorded 11 points and seven rebounds for the Gamecocks, who shot 40.7 percent from the field.

Swing man Keyshawn Bryant was injured in the middle of the first half and returned to the bench with his arm in a sling. The team also lost AJ Wilson, who had seven rebounds, to an injury with seven minutes remaining.

The Gamecocks’ defense pressured Auburn early, but the visitors grabbed their first lead on a steal and breakaway dunk by Dylan Cardwell at 15:43 for an 8-6 lead.

Green scored or assisted on four straight buckets, and Chris Moore’s dunk put the Tigers up 25-12 near the half’s midpoint. South Carolina’s 6-0 run cut the deficit to 32-23, but Green’s three-point play at 5:30 stopped the home side’s momentum.

Stevenson paced South Carolina with 13 points, but the squad connected on just 35.7-percent shooting (10-for-28).

But the Tigers outscored the Gamecocks 18-11 to end it and improve to 3-0 on the road.