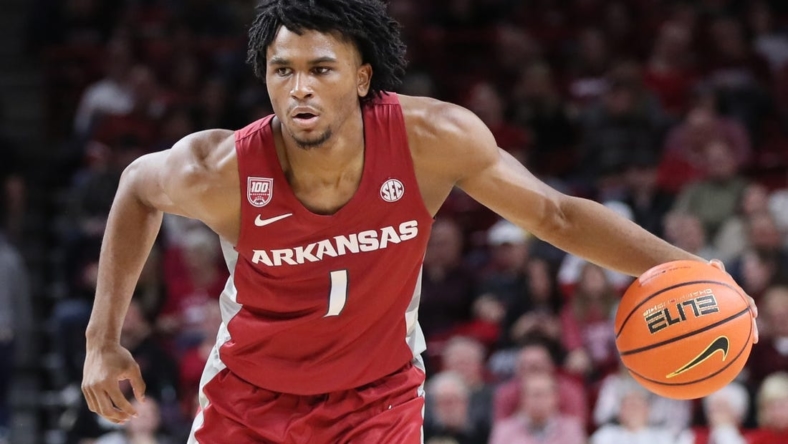 Teams that couldn’t have started the season more differently meet on Monday when undefeated No. 9 Arkansas faces winless Louisville in the Maui Invitational in Lahaina, Hawaii.

While Arkansas (3-0) has won its three games by an average of nearly 20 points, the winless Cardinals have dropped all three home games by a point and are 0-3 for the first time since the 1986-87 season.

“I think it’s really good for us to get away, be able to bond as a team and play somewhere else,” Louisville guard El Ellis said. “Last year, we went to the Bahamas and we played really well. We bonded as a team. I feel like this could be our turnaround as well. We just got to continue to keep our heads up, continuously believe that we’re a really good team, and we’ll be fine.”

The winner will face the victor of No. 10 Creighton and No. 23 Texas Tech on Tuesday night, with the losers meeting in the consolation bracket earlier in the day.

Arkansas is coming off a 71-56 victory over South Dakota State on Wednesday in Fayetteville, Ark.

Ricky Council IV scored a game-high 19 points to lead four Razorbacks in double figures, including Trevon Brazile, who had a double-double with 13 points and a game-high 10 rebounds, Davonte Davis (13 points) and Jordan Walsh (10).

Arkansas held the Jackrabbits to 32.1 percent shooting from the field, including 3 for 16 (18.8 percent) from beyond the arc, and forced 20 turnovers.

“Really happy with how we’ve been defending,” Arkansas coach Eric Musselman said. “I think when we do drills in practice, they do a really good job surprisingly. I thought maybe this would have to evolve. But the buy-in and paying attention in drills, really high-level, maybe as much as any team that we’ve had.”

Meanwhile, Louisville is coming off a 61-60 loss to visiting Appalachian State on Tuesday. The Cardinals battled back from a 38-25 halftime deficit to get the deficit to one on Ellis’ jumper with 24 seconds left before being held scoreless the rest of the way.

Ellis finished with a game-high 29 points and Brandon Huntley-Hatfield added 12 points and 10 rebounds, but no other Cardinal finished in double figures.

The Cardinals, who also suffered one-point setbacks to Bellarmine and Wright State, are led by Ellis, who averages a team-high 24.0 points and 3.3 assists per game.

“We all know we’re three points combined from being 3-0. I think if we’re 3-0, there’s a lot of different feeling and different questions in this room,” James said on Thursday. “As a team, we know we’re right there.”