No. 8 UCLA runs wild in second half, stomps Norfolk State 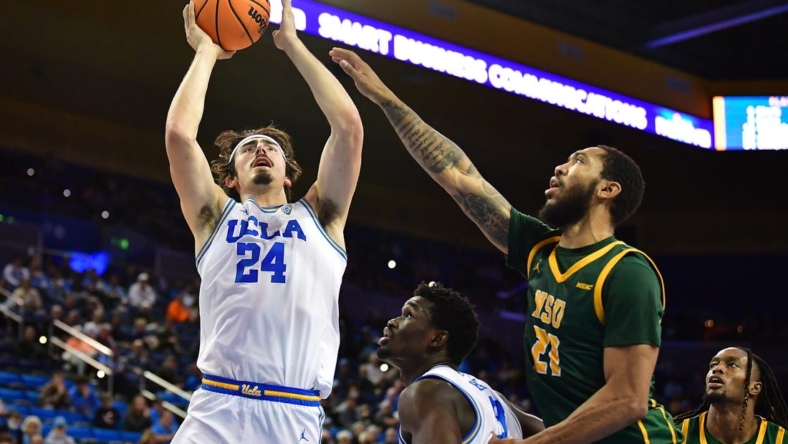 Six players scored in double figures for No. 8 UCLA, which went on a 23-4 run over the first 11 1/2 minutes of the second half en route to an 86-56 blowout of Norfolk State on Monday in Los Angeles.

The Bruins (3-0) never trailed, but faced a challenge through the first half from the reigning two-time Mid-Eastern Athletic Conference champion Spartans (2-2).

UCLA took a 13-point lead into the intermission, which quickly ballooned out of the break. Jaylen Clark opened the second half with a 3-pointer, part of his game-high 19 points on another strong all-around game from the Bruins wing.

Clark shot 7 of 11 from the floor and 5 of 8 from 3-point range to go with nine rebounds, two steals and a blocked shot.

Kris Bankston led Norfolk State with 17 points on 8-of-11 shooting from the floor while matching Clark’s game-high of nine rebounds. Cahiem Brown added 13 points off the bench.

UCLA contained Norfolk State’s Joe Bryant to just four points on 2-of-8 shooting. Bryant was coming off a 24-point performance in the Spartans’ loss at Baylor on Friday. Beyond Bankston, Norfolk State’s other four starters combined for just 18 points on 9-of-26 shooting.

The Spartans’ points came almost entirely from the interior, with 40 points in the paint. They finished just 2 of 14 from 3-point range and 2 of 4 at the free-throw line.