Nov 12, 2021; Waco, Texas, USA; Baylor Bears guard Matthew Mayer (24) drives to the basket against against the Incarnate Word Cardinals during the first half of a game at Ferrell Center. Mandatory Credit: Chris Jones-USA TODAY Sports

Matthew Meyer scored 14 points and the Baylor defense did the rest as the No. 8 Bears rolled to an 87-60 win over Incarnate Word on Friday in Waco, Texas, in the season opener for the defending national champions.

The Bears unveiled their NCAA championship banner before the game, then took a little while to get in sync. However, they led by 12 points at the break, by 21 six minutes into the second half, and ran away from Incarnate Word over the final 10 minutes for the easy victory.

Baylor shot 49.3 percent from the floor and forced 21 turnovers, converting those Incarnate Word miscues into 33 points.

Freshmen Kendall Brown (13 points) and Jeremy Sochan (10), who make up part of the highest-ranked recruiting class in program history, proved effective on offense for the Bears. LJ Cryer added 13 points for Baylor, with James Akinjo, a transfer from Arizona, scoring 10, and Jonathan Tchamwa Tchatchoua pulling down a game-high 10 rebounds. 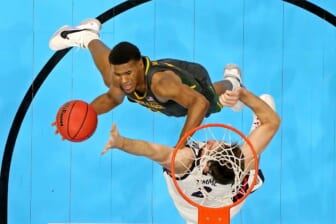 The Bears trailed by six points after a layup by Glasper at the 11:10 mark of the first half before rallying to take the lead at 18-16 on a basket by Akinjo two minutes later.

Incarnate Word went back in front thanks to two 3-pointers from Griscti, but Baylor finally found its stride, running off a 19-6 run and canning its final six shots of the half to carry a 40-28 advantage into halftime.

It was the Bears’ bench that made the difference in the first half as Cryer (11 points) and Sochran (10) paced Baylor’s scoring in the first 20 minutes. Lutz and Glasper scored nine points each by halftime to lead Incarnate Word.