No. 7 USC returns after long layoff to defeat Cal 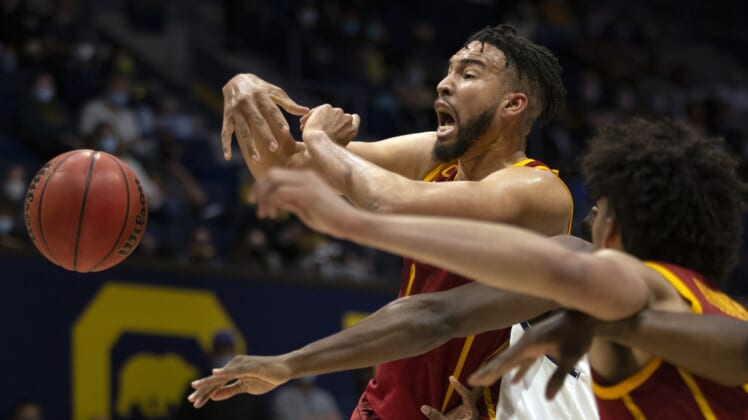 Cal’s Grant Anticevich matched Mobley with 19 points, but the Golden Bears (9-6, 2-2), who saw a nine-game home winning streak come to an end.

Seeking a sixth straight win overall, Cal led just briefly in the first half, but managed to hang within 36-31 at the break and 40-35 into the fourth minute of the second half.

But the Trojans, who shot 53.4 percent from the field, were too much for the underdog Golden Bears to handle offensively, led by Mobley’s 6-for-12 night and Peterson’s 8-for-14.

The game got away from Cal late, after an Andre Kelly hoop had pulled the hosts within 59-53 with 7:08 to play.

Anticevich had a chance to cut the deficit in half on the Golden Bears’ next possession, but he misfired on a 3-pointer.

Then Peterson hit a jumper, Ellis two free throws and Joshua Morgan a layup to double the advantage to 12 at 65-53 with 5:18 to go.

Hitting six of his nine shots, Chevez Goodwin added 12 points for USC, which had gone more than a month without playing a Pac-12 game.

Mobley and Petersen also were the Trojans’ leading rebounders with nine apiece, helping the visitors dominate the backboards to the tune of 39-24.

Kelly finished with 13 points and 11 rebounds for Cal, while Jordan Shepherd went for 17 points.

Joel Brown, who went scoreless, amassed a game-high nine assists for the Golden Bears, one fewer than USC’s team total.