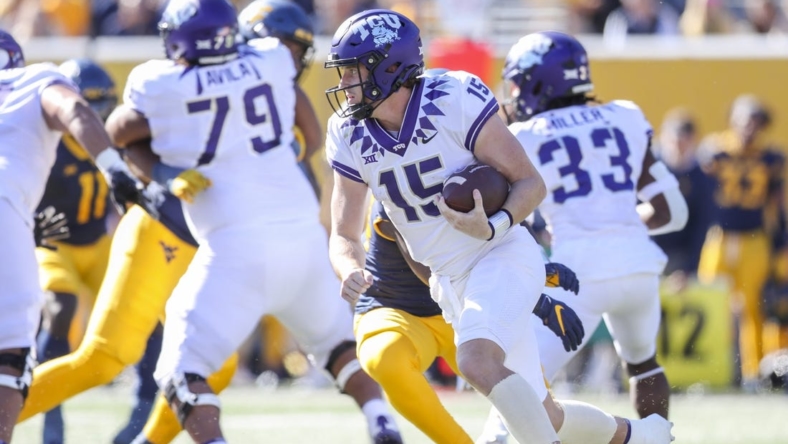 Max Duggan threw for 341 yards and three touchdowns as No. 7 TCU earned a 41-31 win over West Virginia on Saturday at Morgantown, W.Va.

Duggan completed 16-of-28 passes and was aided by running back Kendre Miller, who rushed for 120 yards and a TD on 12 carries. Taye Barber, Quentin Johnston and Savion Williams were on the receiving end of Duggan’s touchdown throws.

Daniels’ 23-yard scoring strike to Reese Smith cut West Virginia’s deficit to 34-31 with 4:12 remaining. Duggan then threw an interception to set WVU up at its own 16, but a three-and-out killed any chance of a comeback.

Casey Legg made a 33-yard field goal to pull the Mountaineers within 28-24 with 11:05 left in the third quarter. After the defense forced a three-and-out, WVU had a chance to take the lead, but couldn’t convert a fourth-and-goal at the Horned Frogs 4-yard line.

TCU advanced to the Mountaineers’ 1 on the ensuing drive. However, the WVU defense perfectly read an end-around, tackling Johnston for a loss of 11 yards and forcing the Horned Frogs to settle for Griffin Kell’s 30-yard field goal and a 31-24 lead early in the fourth quarter.

Miller also scored on the ground in the first half for the Horned Frogs, who racked up 332 total yards of offense through the first 30 minutes of action. West Virginia tallied 305.

After Donaldson’s 1-yard rushing touchdown opened the scoring, Duggan found Barber for a 71-yard TD on TCU’s following possession to knot things at 7-all.