No. 7 Baylor overcomes slow start to breeze by McNeese St. 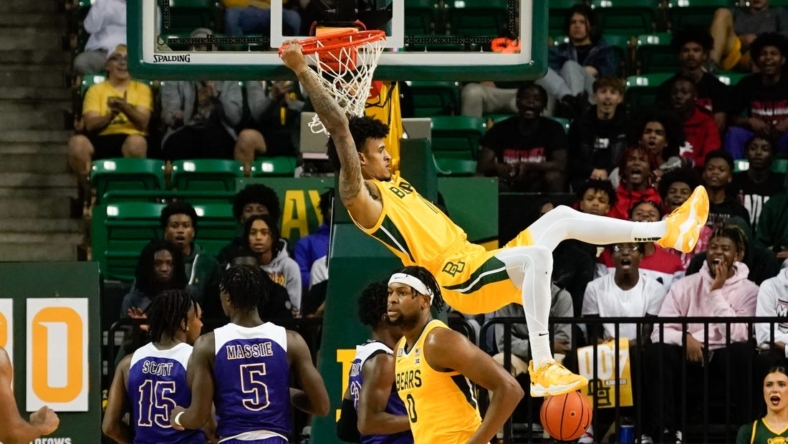 Keyonte George scored 17 points and LJ Cryer added 16 as No. 7 Baylor overcame some early doldrums and rolled to an 89-60 win over McNeese State on Wednesday afternoon in Waco, Texas.

The Bears (5-1), who split their two games in the Main Event in Las Vegas over the weekend, led by nine points at halftime Wednesday and extended their advantage to 22 just under nine minutes into the second half by forging a 12-0 run that essentially put the game on ice.

Adam Flagler scored 13 points and Langston Love hit for 11 as Baylor outshot the Cowboys 60 percent to 32.1 percent in the second half.

Zach Scott and Johnathan Massie had 12 points each and Christian Shumate grabbed 10 rebounds to lead McNeese State (2-4), which has lost four of its past five games.

The Bears shrugged off a ragged first half in which they were down by as many as four points twice, the last coming after a jumper by Tyron McMillan at the 11:52 mark gave McNeese State a 16-12 advantage. Baylor answered with a 7-0 run before the Cowboys rallied again to tie the game at 19 with 9:14 to play in the half.

But Baylor’s overall depth and shooting prowess was eventually too much for McNeese State, with the Bears scoring nine of the half’s final 11 points to produce a 39-30 lead at the break.

Cryer paced all scorers in the first half with 14 points while George added eight for Baylor. The Bears outshot McNeese State 53.3 percent to 45.8 percent in the half and forced 10 Cowboys turnovers that they turned into 12 points.

Scott led McNeese with nine points over the first 20 minutes of play and canned three of the Cowboys’ six 3-pointers in the half. McNeese had a 16-12 edge on the boards at halftime.

Baylor dispelled any notion of a McNeese State upset when it outscored the Cowboys 18-5 over the first 8 1/2 minutes of the second half.