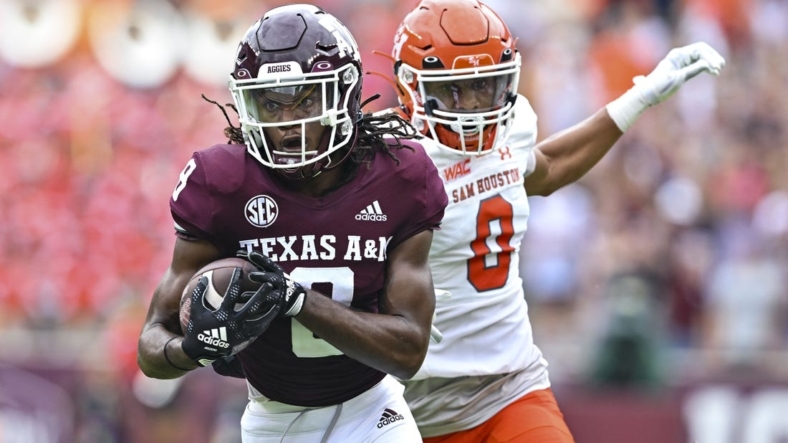 King completed 20 of 31 passes and tossed a pair of interceptions in his first game since the second contest of last year, when he suffered a season-ending leg injury in the first quarter at Colorado. He also added 35 yards on six rushes before taking a seat for good in the fourth quarter.

The Aggies were never really threatened but didn’t put the Bearkats away until the second half, outlasting a lightning delay of more than two hours that lengthened intermission. But their defense wasn’t affected a bit by the unusual circumstances, limiting Sam Houston State to 198 total yards.

Georgia Tech transfer Jordan Yates struggled against Texas A&M’s team speed, completing 14 of 28 passes for only 91 yards and absorbing a pair of sacks. This is the final season in FCS for the Bearkats, who will join Conference USA next year.

King initiated scoring at the 3:39 mark of the first quarter when he turned 3rd-and-11 into six points by finding Yulkeith Brown for a 66-yard touchdown pass. Sam Houston State reached the Aggies’ 23 on its next drive, but Yates threw a deflected pass under pressure that was picked off by Jardin Gilbert.

Texas A&M started to pull away late in the first half. Caden Davis converted a 40-yard field goal with 4:59 on the clock for a 10-0 lead, and King hit Ainias Smith for a 63-yard scoring strike with 50 seconds remaining for a 17-0 halftime cushion.

Following the lengthy halftime, the Aggies increased their advantage to 24 with a drive of nearly six minutes to start the third quarter. Devon Achane capped the march with a 1-yard touchdown run with 8:52 left in the quarter.

King capped the scoring with a 43-yard strike to Smith with 11:10 left in the game. Smith ended the day with six catches for 164 yards.