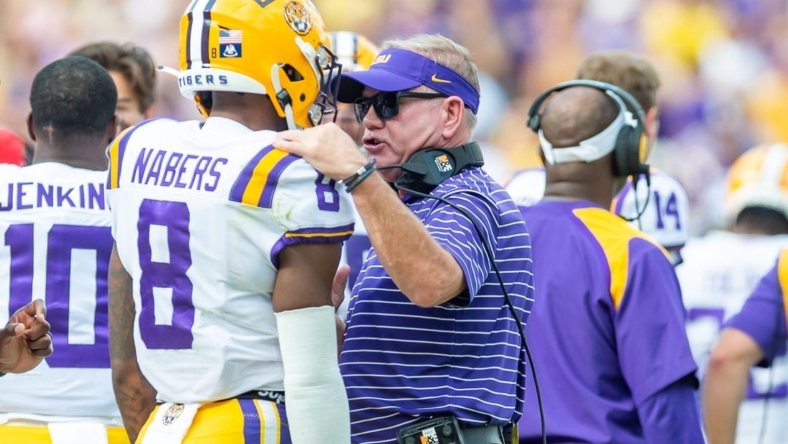 They will conclude their home schedule when they step out of conference play to face UAB on Saturday night in Baton Rouge, La. Then they will visit Texas A&M before heading to Atlanta for the title game Dec. 3.

LSU was unranked entering its first season under head coach Brian Kelly. As soon as it appeared in the rankings or the first time, LSU was whipped by then-undefeated Tennessee 40-13. But the Tigers haven’t lost since, producing one of the most surprising seasons in college football.

Kelly said his focus this season was on building a foundation, not necessarily seeking a specific number of victories or titles.

“I didn’t put any wins or losses on this team,” Kelly said. “I put, ‘I want to play hard, I want to be better in November, I want to teach them how to win’. I think we’ve hit all of those markers, and that’s kind of where I wanted this program to be. I think we’re at where we should be at this time.”

After upsetting Alabama 33-32 in overtime two weeks ago, the Tigers went to Arkansas last week and struggled before edging the Razorbacks 13-10. They wrapped up the West a few hours later when Alabama held off Ole Miss.

“Winning is a habit and losing is a habit,” Kelly said. “What we can take out of that game is they have done the things necessary to make winning a habit. They found a way to win that football game.”

UAB (5-5, 3-4 Conference USA) needs a win in its final two games to become bowl eligible. It’s coming off one of its most impressive victories of the season, a 42-21 triumph against North Texas in the home finale.

The Blazers finished 5-1 at home and are 0-4 on the road. But all of the road losses – against Liberty, Rice, Western Kentucky and Florida Atlantic – have been by seven or fewer points. Their lone home loss was a 44-38 set-back against UTSA in double overtime.

“Every loss came down to the end and we had opportunities to either win the game or tie the game, and that’s tough,” first-year coach Bryant Vincent said. “It challenges your character, it challenges your mentality, and that’s something that this football team has never strayed from.”

In the victory against North Texas, DeWayne McBride rushed for three touchdowns, giving him a school-record 17 this season. He has 10 straight 100-yard rushing games and UAB ranks sixth in the FBS with 247.1 yards per game. McBride is second with 1,407 yards.

“We realize that we’re going into Tiger Stadium in a night game,” UAB coach Bryant Vincent said. “They’re ranked sixth in the country, they’re going to play for the SEC championship. This is a game that our players and this football team, we’re not going to back down.”