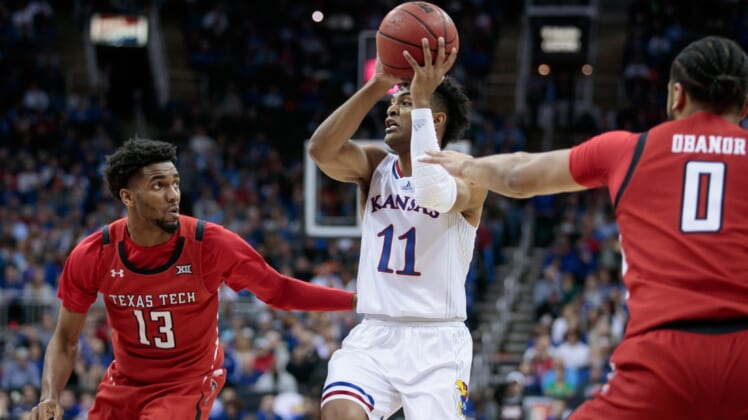 The final score was not an indication of how the game went, as Kansas scored six straight points in the final minutes to pull away.

Kansas receives the conference’s automatic bid to the NCAA Tournament, though both teams are likely to be on one of the top three lines. Kansas is likely headed for another No. 1 seed.

In Bill Self’s 19-year career as head coach at Kansas, his teams have never been lower than a No. 4 seed and have earned a No. 1 seed eight times, not including this season.

Ochai Agbaji had 16 points for Kansas (28-6), which also got 14 from Christian Braun and 12 each by Jalen Wilson and Remy Martin.

Agbaji hit a 3-pointer early in the half to give Kansas a five-point lead. But Tech simply wouldn’t go away. With the Red Raiders trailing by four, Obanor hit a 3-pointer. Following a steal, Kevin McCullar fed Shannon for a layup and Tech had its first lead since early in the first half.

The Red Raiders extended the lead to three, but Kansas came right back to retake the lead. McCormack’s two free throws gave Kansas the largest lead by either team at 63-56 with 5:56 remaining.

Neither team could seize control in the first half. Neither could garner more than a four-point lead, nor could they put together a run of better than 4-0 until 1:50 remained.

Kansas led 37-36 at halftime after Williams hit a 3-pointer with 15 seconds left in the half.

Braun and Martin led Kansas with 10 points each in the first half. McCormack had nine and Agbaji had eight.