No. 6 Kansas cruises past Nevada 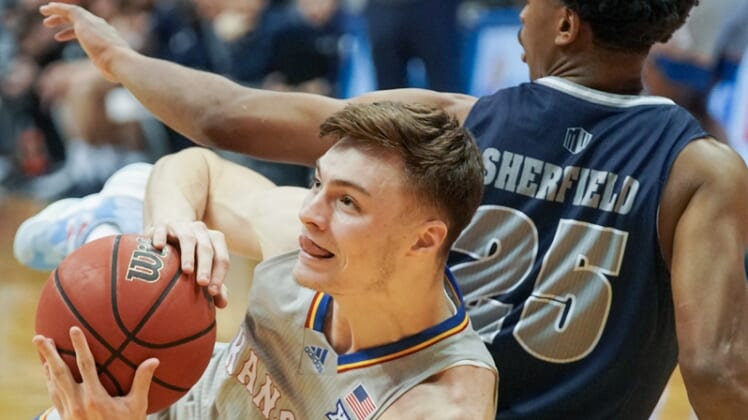 The Jayhawks (10-1), who secured Nevada as a fill-in on a night they had been scheduled to play Harvard, struggled offensively at times but still shot 53.8 percent for their sixth straight victory.

A 12-point flurry in the second half, which included two free throws by Braun following a technical foul on Nevada coach Steve Alford, gave the Jayhawks a 61-36 margin with 12:51 left.

That prompted Alford to call a time out but the Wolf Pack (6-5) trailed by too many and could not preserve their five-game winning streak.

Dajuan Harris added a career-high 14 points by making all five of his attempts. David McCormack had 14 points and helped Kansas establish a 46-14 scoring advantage in the paint.

The quick Kansas defense has generated at least 20 turnovers in each of its last three games.

In addition to being sloppy with the ball, Nevada shot just 37.5 percent. Desmond Cambridge Jr. and Grant Sherfield each scored a team-high 16 points but went just 6-for-19 and 7-for-17, respectively.

Kansas used an 8-0 run late in the first half en route to a 39-27 halftime edge. The Jayhawks forced 16 first-half turnovers, but only converted those miscues into 15 points.

Braun scored 14 points and Agbaji added nine, though Kansas also proved careless with the ball, committing 10 turnovers before the break.

Cambridge scored 13 points and Sherfield added nine to pace the Wolf Pack in the first half. After trailing by 11, Nevada narrowed the margin to 24-18 with 8:20 left before committing turnovers on five straight possessions.

Kansas announced Wednesday it will play at home Saturday against George Mason after the Jayhawks’ Big 12 opener scheduled that day against TCU was postponed because of COVID-19 concerns for the Horned Frogs. The Jayhawks have won 24 straight at home.