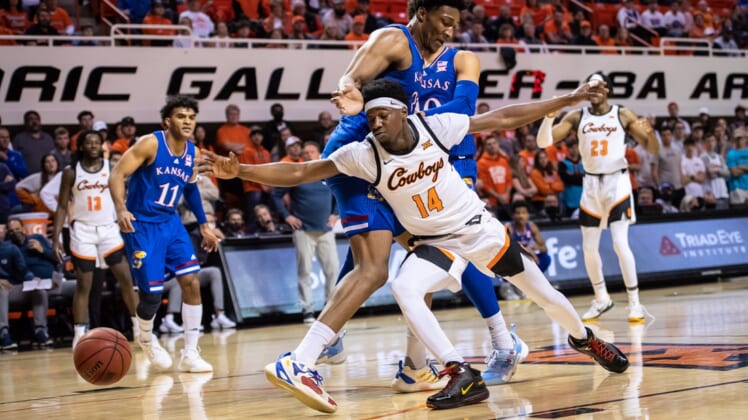 David McCormack came off the bench to collect 17 points and a career-high 15 rebounds as No. 6 Kansas overcame a lengthy scoring drought to beat Oklahoma State 74-63 at Stillwater, Okla., in the Big 12 opener for each team.

Ochai Agbaji netted 16 points for the Jayhawks (12-1 Big 12, 1-0), who went almost 10 minutes without scoring before Mitch Lightfoot hit their first attempt of the second half.

That bucket trigged a quick flurry as Kansas snapped a halftime tie by canning its first five 3-point attempts of the second half. A 13-3 run enabled the Jayhawks to boost the lead into double digits before holding on against the pesky Cowboys (7-5, 0-1).

McCormack, who has struggled much of the season, got replaced in the starting lineup by Lightfoot. Shortly after inserting McCormack, Kansas coach Bill Self lit into his big man and after that, McCormack flourished. He led the Jayhawks to a 50-36 rebounding advantage and finished with his second double-double of the season.

Christian Braun added 15 points and Jalen Wilson grabbed 15 boards as the Jayhawks won their eighth straight and ran their string of wins in conference openers to 31. A 9-0 run that ended with a 3-pointer by Remy Martin at the 3:37 mark iced the outcome.

Oklahoma State, playing its first game in 17 days because of a COVID-19 pause, shot just 35.7 percent but continually scrapped by forcing 17 turnovers. Isaac Likekele notched 16 points and 12 rebounds to pace the Cowboys, who did not score over the final 3:14.

Oklahoma State used 14 unanswered points to close the first half and forge a 29-29 tie at the break. The Cowboys had trouble triggering their offense but pestered Kansas into missing its last 20 shots of the half.

Agbaji scored 11 first-half points to lead all scorers but went cold and finished the half just 3-for-10, including 2-for-6 from behind the arc. The Jayhawks went scoreless over the final 9:12, and their starters went just 7-for-27 for the half, and none of them shot better than 50 percent.

Likekele collected eight points and nine rebounds in the first half to pace the Cowboys, who trailed 29-15 before launching their comeback.